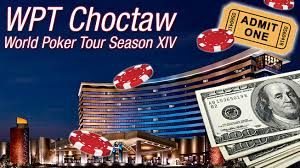 The World Series of Poker is, save for the Main Event final table, done for the year, but live poker tournament play around the world remains in full swing. That includes the first post-WSOP World Poker Tour event in Durant, Oklahoma.

WPT Choctaw will be paying out $681,758 to its winner. Heading into play on Monday, just 40 players remained, including some big name pros such as Olivier Busquet and Connor Drinan.

Jerry Wong, a 2016 November Niner, enters Day Three with 413,000 chips, well below the average stack. He’s looking for a tune up victory in preparation for the Main Event final table October 30.

Wong is already guaranteed at least $1 million for 9th place in the WSOP Main Event. But he would rather win the bracelet and the $8 million that goes with it. To do that, he’ll need to chip up early at the final table. His 10,175,000 chips are only good for 8th out of nine players.

But, for now, Wong is focused on becoming a WPT champion for the first time in his career. Ditto for Busquet, although he already has a WPT title to his name who enters Day Three with a healthier stack (1,834,000).

Busquet and Harrison Gimbel are the lone remaining WPT Champions Club members left in the field. Randi Lister is the chip leader at the end of Day Two with 2,164,000. He will have to hold off some of the top players in the world, including Busquet and Drinan, if he expects to win his first WPT title.

Russ Campanella Picks Up Victory and $26,500 in New York

Russ Campanella, a 42-year old chiropractor, is $26,500 richer after having won the 2016 Senecca Niagara Falls Summer Slam Main Event. The $600 buy-in tournament had 475 players. There were two Day One starting flights, and three total days of play.

For Campanella, this was the biggest win of his poker career. He now has over $150,000 in live tournament winnings. The Rochester, New York resident competed in many non-WSOP tournaments in Las Vegas this summer, cashing three times in events at Planet Hollywood. He also picked up his first career WSOP cash (454th place in the $1,500 Monster Stack tournament).