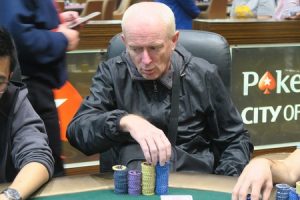 British poker pro and gentleman of the game, Dave Colclough has died at the age of 52. (Image: pokerstars.com)

Dave Colclough, one of the UK’s original poker stars, has passed away at the age of 52 after losing his battle with cancer.

Back when the poker industry was booming, Colclough was one of the British players who quickly made a name for themselves.

Having been a top circuit player before Moneymaker lit the torch that sparked a revolution, El Blondie, as he was known, was quick to capitalize on the influx of new players.

In fact, such was Colclough’s prowess on the European poker scene, that he was inducted into the European Poker Players Hall of Fame in 2005.

Aside from his skills at the felt, especially in Pot Limit games, it was Colclough’s personality that made him a standout player on the circuit.

Sitting in stark contrast to another sadly departed British player, Dave Ulliott, Colclough came to be known as one of the game’s most likeable player when he appeared on shows such as Late Night Poker.

That community’s affection towards Colclough and his contributions to the game became clear on October 18 when it was announced that he’d lost his battle with cancer.

American pro and friend Brian Wilson was one of the first people to announce the news via his Facebook page.

“Today is a very sad day as a dear friend and Hall of Fame Poker member Dave Colclough has lost his battle w/ cancer and passed away. I cannot express the sadness that I feel for the loss of Dave,” wrote Wilson.

Pros Pay Tribute to a Gentleman

As that announcement filtered through the social media airways, a chorus of pros marked Colclough’s passing with their own sentiments.

James Dempsey: “Saddened to hear of the passing of Dave Colclough, an absolute gent both on and off the tables and one of my poker heroes #RIP #elblondie.”

Matt Savage: “Sorry to hear of the passing of Dave Colclough, he was always a nice guy and had great vision of poker before the boom. #RIP.”

Victoria Coren M: “I’m very shocked and sad to hear of the death of Dave Colclough, one of the friends and heroes of my early days in poker. Terrible news, RIP.”

Although Colclough may not have achieved as much notoriety in the US as Ulliott, there’s no doubt he had a huge impact on the game in Europe.

In addition to demonstrating that a methodical and mathematical approach to poker could be profitable back in the early noughties, Colclough showed that nice guys don’t always finish last.

During the poker boom it was common to see the more bombastic and outspoken pros gain mainstream exposure, but Colclough was a player who bucked that trend and, in the opinion of many, made the game better for it.

This UK Halle Of Famer did a good job showing you do not need to call your opponent an idiot on the climb to the top. R.I.P.