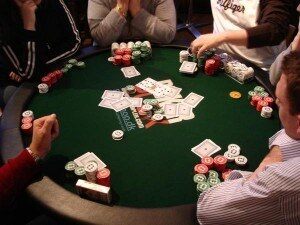 A two-pronged attack to get poker home games legalized in Maryland is currently underway thanks to two Democrats.

Senator Nancy King and Delegate Kirill Reznik have each submitted bills that would give Maryland residents the freedom to run poker games from the confines of their home.

Senate Bill 184 (King) and House Bill 59 (Reznik) have already received support from 25 lawmakers in the State and given that Maryland recently authorized live dealer table games in its casinos, many are hopeful that new legislation could be enacted within the coming months.

As it stands today, poker home games in Maryland are illegal and anyone caught running tournaments or cash games can be fined up to $1,000 and/or thrown in jail. Although the law isn’t strictly enforced and the number of people charged with this offence is relatively low, the threat is always there.

However, if the two bills can gain some traction over the next few weeks, then King and Reznik are confident that this legal barrier would be removed by October.

Poker has always been popular in Maryland, thanks in part to the World Series of Poker (WSOP). As well as hosting a Circuit event at the Horseshoe casino for the first time back in 2014, former WSOP final-tablist Steve Dannenmann is from Maryland. Dannenmann first hit the headlines back in 2005 when he finished second in the WSOP Main Event behind Joe Hachem.

Although he’s never managed to win anything close to the $4,250,000 he banked that day, his story resonated with the US public thanks to his home game background. During his run in the Main Event, Dannenmann explained how he earned his seat in the $10,000 tournament courtesy of his home game friends.

Describing himself as the “fourth best player in his home game”, Dannenmann was able to split the entry fee with Jerry Ditzel and parlay that into a memorable WSOP run.

No Room for Online Poker in the Law

When it comes to the specifics of the bills, the main point that stands out is the fact home game owners won’t be able to make a profit from the events. Contained within the proposed legislation is the clause that “other than winnings accrued by participating as a player in a game” the owner shall not benefit in any other way.

Additionally, the use of any electronic betting equipment to connect to the internet will be illegal. This means that players hoping the new home game laws will allow them to play via the internet will be left disappointed. However, what the new law will mean is that grinders across Maryland will be free to bet in the comfort of their own home and not be subject to the same regulations major casinos are.

“What makes a casino a casino is that a cut of the winnings is saved for the house. The laws are so restrictive now that a person’s home is deemed a casino,” Reznik told the House Ways and Means Committee.

I was kind of disappointed in this article. When I first read it, I was thinking we were on our way to legal on line poker playing. But, after completely reading the article, I discovered that that was not the facts.

Reason for my excitement is, I have family in Maryland. And, could have played there legally. I think. lol