Las Vegas sportsbooks won’t be protesting the NFL after Sunday’s profitable Week 3 performance. Underdogs covered the spread in 10 of 13 games, which is always good for the sportsbooks as bettors traditionally favor the favorites. 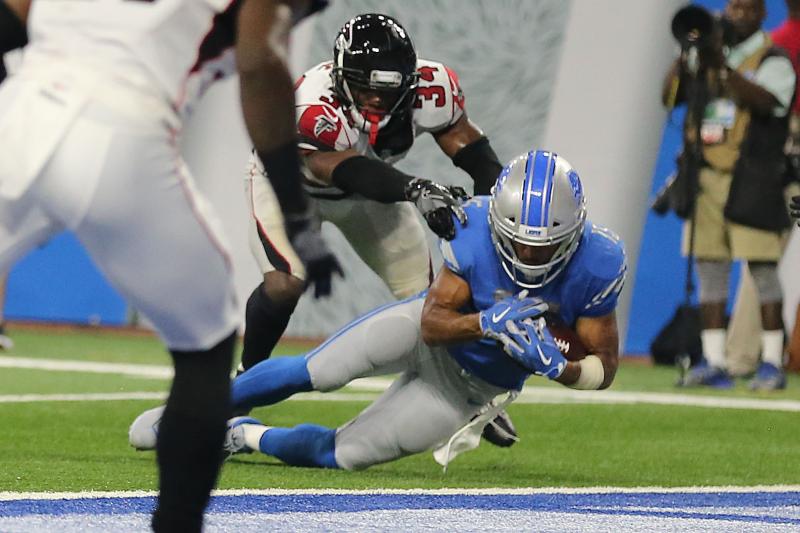 Detroit Lions wide receiver Golden Tate was ruled down just short of the end zone on the final play against the Atlanta Falcons. The Lions were three-point underdogs and lost 30-26. (Image: Bleacher Report)

Week 3 featured some exciting games that may have been overlooked due to the league’s declining TV ratings, and a flock of viewers who may have flipped over to news stations or HGTV shortly after watching the national anthem and related protests.

The highlight of the day was the controversial ending to the Detroit-Atlanta game when Lions wide receiver Golden Tate appeared to have made a game-winning touchdown reception on the final play. However, on further review, the refs determined his knee was down before the ball crossed the plane of the goal line, and the Falcons held on to win 30-26, covering the three-point spread.

That was just one of three Sunday games where the favorite covered.

“It was certainly one of the best days we’ve had,” CG Technology’s VP of Risk Jason Simbal told ESPN.

They were one of six underdogs to win outright on Sunday. Jay Rood, vice president of MGM Race and Sports, told ESPN many of his customers bet on the Steelers to defeat what appeared to be an under-matched Bears team.

“We had a ton of money-line parlays on the Steelers, ton of teasers,” he said. “That was a complete blow to the public.”

But the biggest score of the day came in the Oakland-Washington game. The Raiders, a Super Bowl contender, were a three-point favorite on the road.

Unpredictable things often happen when a team travels across the country to face a less talented opponent in a hostile environment. On Sunday, the Raiders trailed 21-0 early in the 3rd quarter, and by the end were snake bitten 27-10.

With more than 85 percent of the money wagered in that game put on Las Vegas’s future home team Raiders, the outcome worked out perfectly well for MGM sportsbooks.

‘As Good as Mayweather-McGregor’

MGM and CG Technology weren’t the only sportsbooks raking in the dough on Sunday. William Hill Sportsbooks also reported a record day.

Caesars Entertainment’s Director of Specialty Games Frank Kunovic, said Sunday was a banner day. “It was as good as [the] Mayweather-McGregor fight,” he said.

Sunday may not have been so great for the NFL betting public, or those who oppose NFL teams and fans showing massive support for their protesting brethren. But Las Vegas casino bookies can bust out the cigars after a profitable Week 3, a week after action on the field gave them a loss.