If a recent study from the Brookings Institute proves accurate, Las Vegas will suffer greatly due to the coronavirus pandemic. Perhaps, worse than any other US city. And there’s certainly reason to believe the negative effects will trickle down to the local poker industry. 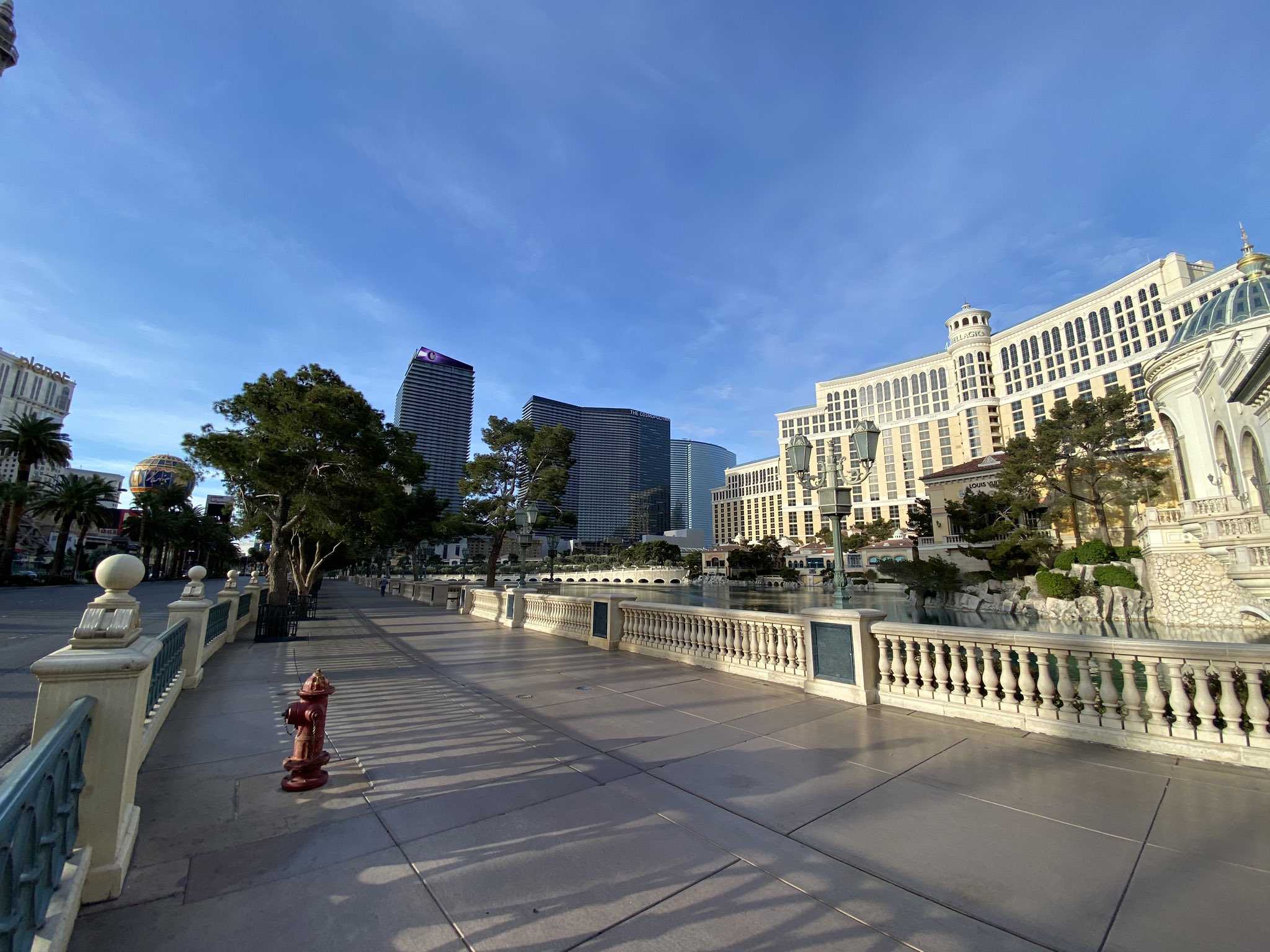 The usually jam-packed Las Vegas Strip is a ghost town due to the coronavirus scare. (Image: Twitter/ John Cynn)

Sin City is widely acknowledged as the gambling (and poker) capital of the United States. With hundreds of casinos in town closed down until at least mid-April, hundreds of thousands of residents are jobless. That includes poker room dealers and managers, cocktail waitresses, servers, pit bosses, slot attendants, and many other workers.

Cities all over the country are suffering financially due to the current pandemic, but if the Brookings Institute is correct, Las Vegas may be in worse shape than anywhere else.

According to Brookings, Las Vegas (and the suburb of Henderson) has the fourth-highest percentage of jobs in the US that are at risk due to COVID-19 among metropolitan areas. But it’s even worse when you consider every other city in the top 10 has fewer than 1 million residents. The entire Vegas Valley has just over 2 million residents, and 342,000 jobs are currently at risk.

Midlands, Texas is the community most at risk with 42.5% of all jobs in jeopardy per the study. That accounts for 46,618 workers potentially losing their jobs. 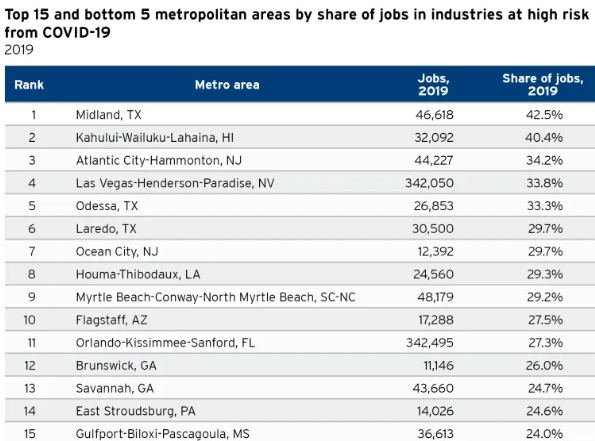 Brookings research concludes that leisure and hospitality jobs are most at risk due to the coronavirus pandemic. And it makes perfect sense given that millions around the country are self-quarantining and avoiding normal leisurely activities. More than 11% of all jobs in the US fit into that category.

Las Vegas is a tourist hot-spot and considered one of the best vacation destinations for adults. In 2019, Sin City had 42.5 million visitors, nearly 20 times the metropolitan area’s population.

Due to all that tourism, a significant percentage of the city’s population work in hospitality, mostly in casinos. So, with casinos all closed down for perhaps more than a month — some experts expect three months of shutdown or longer — hundreds of thousands of locals will be without work for a lengthy period of time. And that will have a negative impact on the local economy.

A full shutdown of the casinos and tourist hot-spots had never occurred in Las Vegas. Not even after the Oct. 1, 2017, mass shooting on the Strip or 9/11. Since Governor Steve Sisolak ordered all non-essential businesses to close in Nevada effective last Tuesday, the Strip has been empty. If you didn’t know any better and you took a walk down the Strip this week, you’d probably think you stumbled upon a ghost town.

Sin City’s mayor, Carolyn Goodman, is concerned about her town’s economy. She has openly opposed the governor’s complete shutdown of all non-essential businesses for a full month (at least).

“I know we, and they, cannot survive any total shutdown of the economy for any length of time beyond the immediate week or two,” Goodman told the Washington Post. “Please, governor, we need to be able to live our lives, support our families and, yes, keep Nevada strong, but together.”

Goodman called for the shutdown of the casinos in Las Vegas to last no more than 10 days. Her wish wasn’t granted.

There are 31 poker rooms in Las Vegas, all of which are temporarily closed. Hundreds of poker dealers and poker room managers are without jobs for the time being.

After the virus dies off — and who knows when that will be — poker players will start returning to their favorite card rooms in Las Vegas, the city with the most poker rooms and poker tables in the country. That is, of course, assuming your favorite room withstands the loss of revenue and can afford to reopen.

Some of the smaller card rooms in town could be in financial jeopardy due to the lengthy closures. And it’s likely many locals and regular visitors to Sin City won’t have as much disposable income with which to play poker for a while once the global health crisis passes.

On top of that, many poker players speculate that the 2020 WSOP will be canceled. If so, the city of Las Vegas will lose out on thousands of tourists coming to town for the series, and the WSOP will lose out on millions of dollars in profits. Last year’s WSOP had 187,298 entries across 89 bracelet events.

The World Series of Poker still hasn’t made a decision on the fate of its upcoming series, which is scheduled to begin May 27 at the Rio All-Suites Hotel and Casino.

Sure, the coronavirus is negatively impacting many communities. More than 16,500 people worldwide have died from the virus, a number that will sadly grow exponentially in the coming months. Hundreds of thousands of others have become ill due to the pandemic. And, as mentioned, the Las Vegas (and other cities) economy will likely suffer greatly, as will the poker community.

But this isn’t the first time a major crisis has done significant damage to Las Vegas. And the city has always found a way to rebound.

According to Money.com, the housing crash of 2007 hit Las Vegas harder than any city in the US for the same reasons mentioned as to why many predict Sin City will suffer financially due to the coronavirus pandemic. By 2010, over 65% of Vegas homeowners owed more than their homes were worth. The national average at the time was 24%.

In 2017, a mentally deranged video poker player from Mesquite, Nevada, opened fire on a country music festival on the Las Vegas Strip, killing 58 innocent bystanders. It was the largest mass shooting in US history.

Both devastating incidents — and we aren’t trying to compare the level of devastation between the two — were soul-crushing to the popular, tourist-friendly town. But the city of Las Vegas and its surrounding communities, in both cases, eventually recovered, both mentally and economically.

So, don’t expect the coronavirus to cause permanent damage to Sin City.