Las Vegas is (Almost) Fully Reopened: A Look Inside the Casinos Post-Pandemic

For the first time since February 2020, it feels like Las Vegas is finally back. Mostly. But it didn’t really feel like that until I walked by the Coyote Ugly nightclub entrance line at New York-New York on the Strip on Saturday night and caught a whiff of all the perfume and cologne. 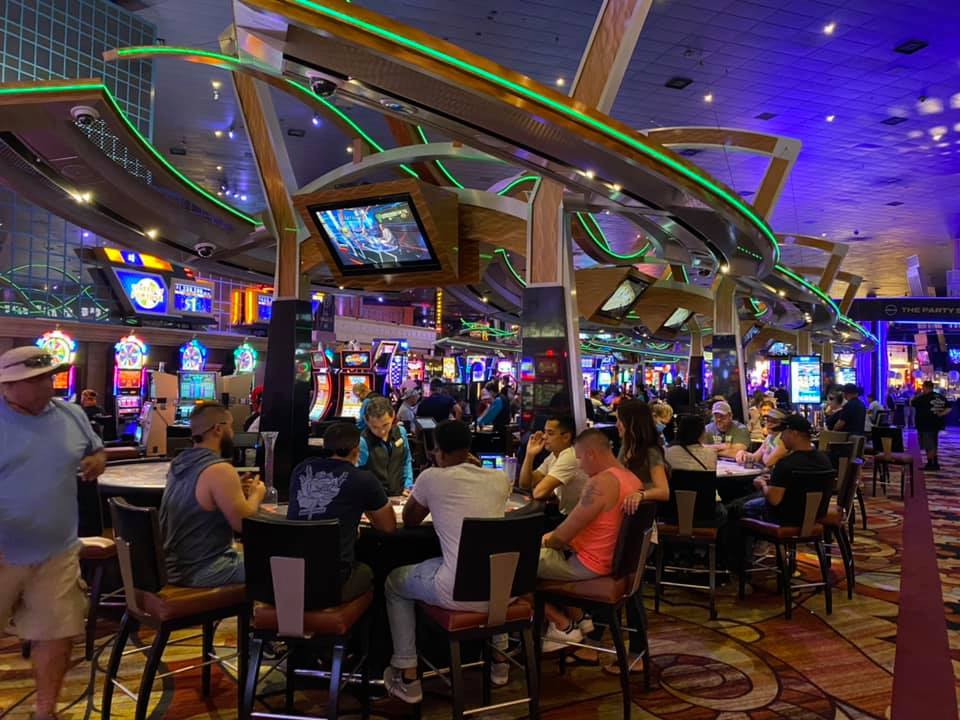 “Okay, now my city is officially back,” I thought to myself while gagging uncontrollably. I don’t spend much time on the Strip these days unless I’m playing poker. After nine years of living in Las Vegas, I’ve been there, done that, and caught the dude-bro cologne gag reflux more times than I can count.

But on June 1, the city, for all intents and purposes, fully reopened with businesses permitted to operate at 100% capacity and mask-wearing no longer required for the fully vaccinated (and everyone else because the honor system is silly). So, I headed to the Strip this past weekend to find out just how much things have changed since my last visit a few weeks ago, before the full reopening.

My first observation upon setting foot inside the Luxor, my initial stop, was that nearly 100% of Las Vegas tourists are vaccinated, which is a statistical anomaly considering only about 45% of the entire US population is. I’m kidding, of course, but it sure was a beautiful sight to see a packed, nearly maskless casino floor again. I had forgotten what faces look like. By my estimation, about 1% (maybe 2%) of all customers wore masks inside Luxor, which seemed to be the trend everywhere on the Strip.

Luxor, a lower-end MGM Resorts property, was rather busy inside the casino and outside at the pool area. There were hundreds of people basking poolside in the 109-degree heat late on Friday afternoon. I recall stopping by this very same pool nearly one year ago, a couple weeks after Nevada Gov. Steve Sisolak permitted the casinos to reopen, and it wasn’t nearly as packed on that day.

Inside the casino, it felt like a normal pre-pandemic Friday afternoon just before the Southern California crowd strolls into town. More than half of the slot machines, by my estimation, were in use, and the table games running were approaching full seating.

The crowd seemed to accurately reflect the overall United States demographics – a mix of young and old people, black and white, Asians, Latinos, degenerate gamblers, chain smokers, and of course the annoying timeshare salespeople. (No, I’m not interested in a free three-day stay in Vegas, please leave me alone!)

One thing to note about comparing June 2021 Las Vegas to previous years is that it’s a bit tough to do because the World Series of Poker isn’t in town right now. In most summers, a good chunk of the tourism comes from WSOP players, but it appears, at least for now, the pent-up demand after the past year of social distancing has made up for the lack of WSOP tourists. Will that continue throughout the summer? That’s the million-dollar question.

It’s hotter in Las Vegas over the summer than it is in most cities, which keeps some tourists away at this time of year. So, in most years, the hotel rooms in June and July are cheaper than they are in the spring or fall, when the weather is more appealing. Room rates on the Strip this past weekend were a bit higher than they were in past years due to increased demand.

On Friday, the NHL’s Vegas Golden Knights were in town for second-round playoff action at the T-Mobile Arena next to Park MGM and New York-New York. I wondered if the game may have caused the Strip to be so busy. But the next evening, a night on which the Knights weren’t playing, the Strip seemed every bit as packed, if not even a bit more so.

Even on Sunday night, after most Southern Californians returned home, parking was still an issue. At around 6 pm, the only spots available in the New York-New York parking ramp were on the roof, and I’m pretty sure I’ve never once had a problem finding a spot on the first few floors on any day other than Friday or Saturday.

Heading north on the Strip, where you’ll find casinos such as Wynn and Mirage, the restaurants, table games, and slot machine areas were packed both on Friday and Saturday evenings. Like the casinos on the south end of the Strip (Luxor, Aria, etc.), few people wore masks. Even the employees were mostly maskless, except for those who hadn’t provided their employer with proof of having had a COVID-19 vaccination.

The packed casinos, crowded sidewalks, long wait times at most restaurants, and maskless crowds certainly made me feel like the Las Vegas of old is (almost fully) back. Adding to the pre-pandemic feeling, nearly every escalator along the Strip was out-of-order, a true Las Vegas staple. There’s nothing like walking miles in the 105-degree heat and coming across broken escalators, forcing you to walk up a tall flight of stairs. 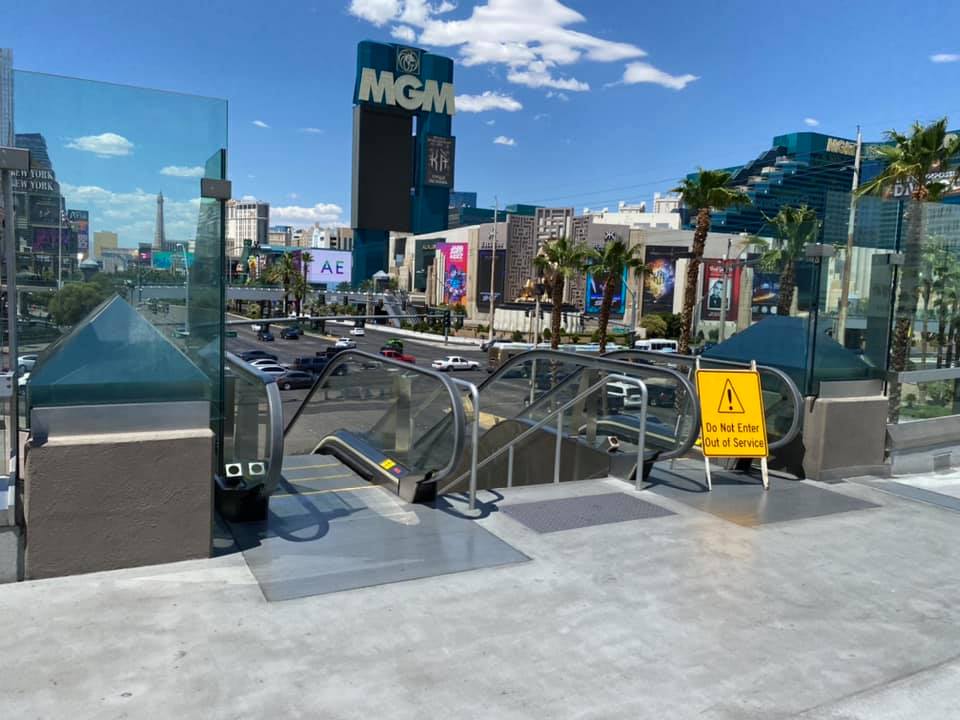 Why can’t the city of Las Vegas ever figure out how to fix an escalator? (Image: CardsChat News)

Fortunately, the casinos had plenty of cold drinks available once I got inside. Most bars are now open and there were jam-packed crowds at nearly every watering hole. At New York-New York on Saturday night, the open bar in the center of the casino floor was quite lively, with hundreds of patrons dancing to loud hip hop music, no masks in sight, partying like it was 2019. Upstairs at the Coyote Ugly nightclub, the entrance line was so long that I couldn’t even see the end of it. That’s typical for the popular nightclubs in Las Vegas, but we’re still in a pandemic, although you wouldn’t know it on the Strip.

On Sunday night, I headed to Fremont Street for the first time in …. actually, I can’t even recall the last time I went up there (I usually save it for special occasions). Much like the Strip, there weren’t many mask-wearers and the large crowd was quite lively. The free live music along Fremont Street was canceled during COVID-19, but it was back this weekend, and it sure was nice to stand outside among thousands of non-socially distanced people listening to some talented cover bands. It feels like it’s been about two years since I’ve experienced that. Oh, wait, it has. 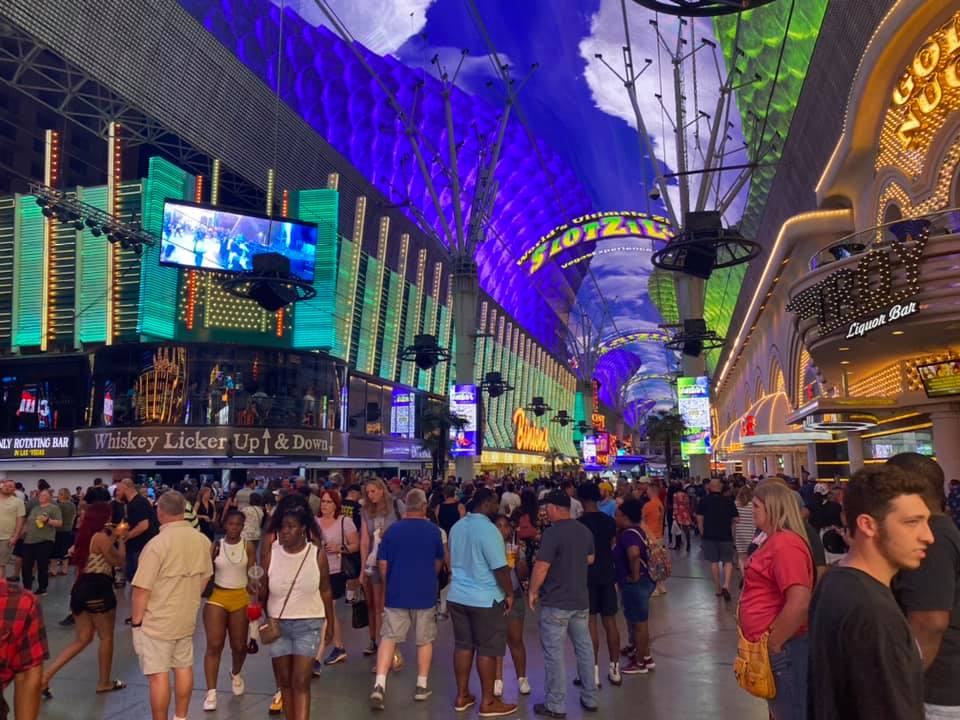 No masks anywhere on Fremont Street. Is the pandemic over? (Image: CardsChat News)

Las Vegas is back …. in most ways. The excitement of Sin City is back, the shenanigans are back, the social distancing is gone, and the masks have (mostly) come off. But there are still a few things missing from the pre-pandemic era.

First off, I noticed quite a few restaurants still aren’t open on the Strip. That led to some longer-than-normal wait times at many places. That isn’t really a huge deal because when I go to the Strip, I typically make reservations in advance. But it’s still sad seeing some empty restaurants knowing that many locals are still out of a job.

I’m also disappointed to see so many empty poker rooms. While poker is definitely back and thriving in Las Vegas, I can’t say the same for some of the poker rooms. The Excalibur and Mandalay Bay poker rooms on the south end of the Strip remain closed. Up north, Harrah’s poker room is still closed, along with the card room at Mirage, which is now a smoke-free slot machine area.

Overall, it felt great not only visiting the Strip, but also seeing so many packed crowds and faces that weren’t covered up by a mask. Las Vegas is booming again, and my hope is that tourism will remain high throughout the summer once the post-pandemic demand fades.

This blog was… how do I say it? Relevant!! Finally I have found something that helped me. Thank you!