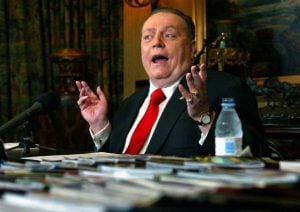 Larry Flynt is rumored to be interested in purchasing the embattled Normandie Casino in California. (Image: AP photo)

Larry Flynt already owns a popular Southern California poker room, Hustler Casino, and soon, he could have another. Hustler Casino is located in Gardena, California, nearby the state’s oldest card club Normandie Casino.


As Normandie prepares to be temporarily shut down, Flynt is rumored to want the property. According to local poker player Robert Turner, the gambling and adult magazine mogul will attempt to turn the Normandie site into a Las Vegas-style casino.

Flynt has long had a parking issue at his casino, so purchasing the embattled card club makes sense. It would give Hustler Casino more parking space and bring in more customers. Normandie, according to those close to the entrepreneur, would add many new entertainment options and restaurants.

No deal has been finalized and Flynt has yet to comment publicly on his potential acquisition. All rumors at this point are, just that, rumors.

What Happened to Normandie?

Normandie Casino is the oldest card club in California and has been a staple in the Los Angeles area since 1936. But it has long taken a back seat the Bicycle Club, Hustler Casino, and Commerce Casino when it comes to poker because those casinos have better games at all levels.

The California Gambling Control Commission recently revoked the owners’ licenses but gave them a four-month reprieve to complete a pending sale of the casino. Normandie has always been owned by the Miller family, passed down from generation to generation.

Since then, it’s been a rocky relationship between the owners and the gambling commission. The casino will be temporarily shutting down due to the conduct of its owners.

73-year old Larry Flynt has lived quite an interesting life. Owning a popular Los Angeles card club is only part of his life story.

Flynt created Hustler Magazine in 1972, a magazine which has been a staple in the pornography industry ever since. Perhaps his most famous edition came in 1975 when Hustler published nude photos of former first lady Jacquelyn Kennedy Onassis. He received a great deal of backlash from the American public.

Fittingly, Flynt has owned numerous strip clubs around the United States over the years. In 2000, he opened the Hustler Casino in Gardena. And now he might be just months away from taking over operation of another famous Southern California card club.