Is Landon Tice Out of His Mind?

If you’re are an amateur or an old-school player, the hyper-aggressive style of some modern pros may seem like insanity. And to be fair, sometimes it is. But far more often than we realize, those huge overbets or wild resteals are correct. 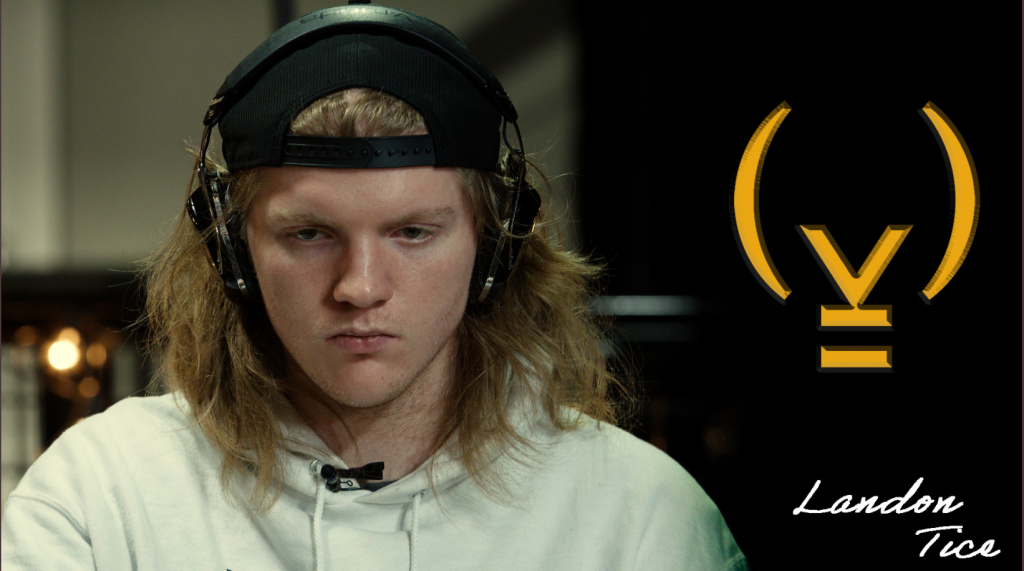 One of the hot poker debates on Twitter last week was about whether Landon Tice was too aggressive in the late stages of a WSOP 6-max event. As usual, opinions varied, and the answer to the question is anything but clear-cut. (Image: CardsChat)

Let’s talk a bit about how these plays work by looking at a tweet from Landon Tice from last week.

While the wording was confusing to some, it appears that there was an open raise from the cutoff seat, and Landon shoved all-in for thirty big blinds with a pair of threes. Reactions to this tweet, and others like it, range from “I’m sure this is solver correct” to “This is ridiculous,” and “ICM suicide.”

Let’s start with the assumption that this play is “solver correct.” Solvers will generally agree on this stuff, so I’m just going to use the output from GTO Wizard because it’s easy to use. The solver, with all the stacks set at 30 big blinds, recommends an open raise from the cutoff seat with about 37% of hands.

In the spot that we believe Tice was in with his pair of threes, the solver recommends a mixed strategy, going all-in 57.5% of the time, and calling 42.5% of the time. Solvers frequently recommend mixed strategies in situations like this to avoid being exploited.

Does this solution mean that Tice made the right decision? That it was “solver correct?” Sort of. You may notice that it seems quite close. A pair of deuces is only a recommended shove 15.5% of the time, and a pair of fives is not an all-in at all. And, there’s quite a bit of information the solver doesn’t have here, including the actual number of big blinds in every stack. 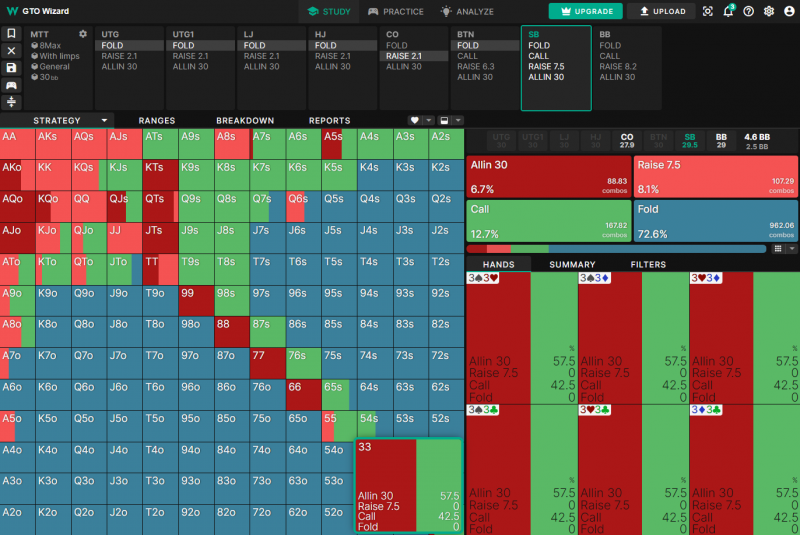 Aside from the fact that some people doubt whether solvers are truly providing perfect solutions, there are a bunch of reasons why playing exactly like a solver isn’t usually a good goal. In a large-field tournament with a smaller buy-in, like the $1,500 6-max that Tice was playing, you’re not facing many players who would be able to exploit a non-mixed strategy.

The solver doesn’t know that you may have a big advantage over the field because it assumes that everyone is playing perfectly. It also fails to take the payout structure into consideration, thus the “ICM suicide” comments.

It seems that in a very tough tournament full of players who are close to solver correct, this play would be right the majority of the time. In a small-stakes tournament, where an expert player would have a huge advantage, it could be a mistake. But even then, the play might be correct.

I often analyze hands with an equity calculator and a spreadsheet that I built many years ago. One of my students refers to it as the “Fox Solver.” If you’re a solver expert, what I do is the equivalent of node-locking and finding the EV of different plays in a specific spot. If you aren’t familiar with those terms, they just mean that I am attacking the range I assume my opponent will hold, and how I expect them to respond to my various plays.

In the later stages of a large-field tournament, a typical player will raise something like 30% of his hands in a spot like this, while a more aggressive player with a big stack might raise more than half the time. This is very dependent on Tice’s read of his opponent, and we don’t have any information about that at all.

I made a few assumptions in my spreadsheet, any of which could be wrong, but I think they’re reasonably close.

With these assumptions, Tice will win the blinds and the raise from the cutoff seat 82.5% of the time without a showdown if he goes all-in. He will go broke 11.5% of the time, and his average profit will be 2.36 big blinds. Given how large the profit is, almost 8% of his stack, this would appear to be so profitable that it would be ridiculous to turn down this opportunity.

These calculations, just like the solver above, ignore the fact that Tice is a highly skilled player in a field where he’s a big favorite. They also fail to account for the fact that tournament payouts often mean that we should take less risk. It’s impossible to quantify what Tice’s advantage is in the remaining field, and I don’t know of an ICM calculator that will handle 39 payout spots, but these things are definitely real, even if we can’t be certain of the size of their effect.

These other factors probably aren’t significant enough to make this spot a fold, even if we use fairly generous estimates. But there’s one more thing to consider: Tice could simply call.

Calculating the expected value of a call is really tough. Tice will be out of position, which is bad news, but if the cutoff seat isn’t a particularly strong player, it might be a better play. And it would be lower variance, which is good for a player who has a skill advantage in a situation where the tournament payout structure has some importance.

What can we conclude?

It’s no surprise that the play is defensible. A player like Tice, who has studied quite a lot of theory and, I assume, spent some time working with a solver, is rarely going to make a truly bad play. It happens, but not often. The question is simply whether a call would have been better in this situation, and that depends on all the factors that we don’t know.

If Tice thought his opponent was fairly strong, or the big blind would often shove all-in if he called, then the shove is clearly correct. If he thought the cutoff seat would fold far too many hands or was opening with too wide a range, then the all-in is a slam dunk. But, if he thought he had a huge advantage against the field and believed he could outplay his opponent after the flop, then he should have called.

I have definitely seen some new-school players lose their minds with hyper-aggression late in tournaments, but I don’t think this is one of those spots. In fact, I jokingly tweeted about an absurdly hyper-aggressive preflop play and people assumed it was about Tice, even tagging him in the tweet hoping to start a fight, which was how I found out about his tweet in the first place.

When I first found Tice’s tweet, the sheer number of people who were certain that it was terrible was surprising, and the polarization was remarkable as well. The number of people who instantly assumed the play was “solver approved” was similar to the number who thought it was an absurdly bad play.

Given that finding an actual preflop solve to the exact spot Tice was in is nearly impossible, and certainly hadn’t been done by anyone who responded to his tweet, it appears that many poker players, as usual, have more confidence in their opinions than actual knowledge.