Landon Tice called it quits less than 25% of the way into his heads-up poker match against Bill Perkins, as he determined victory was more improbable than anticipated. 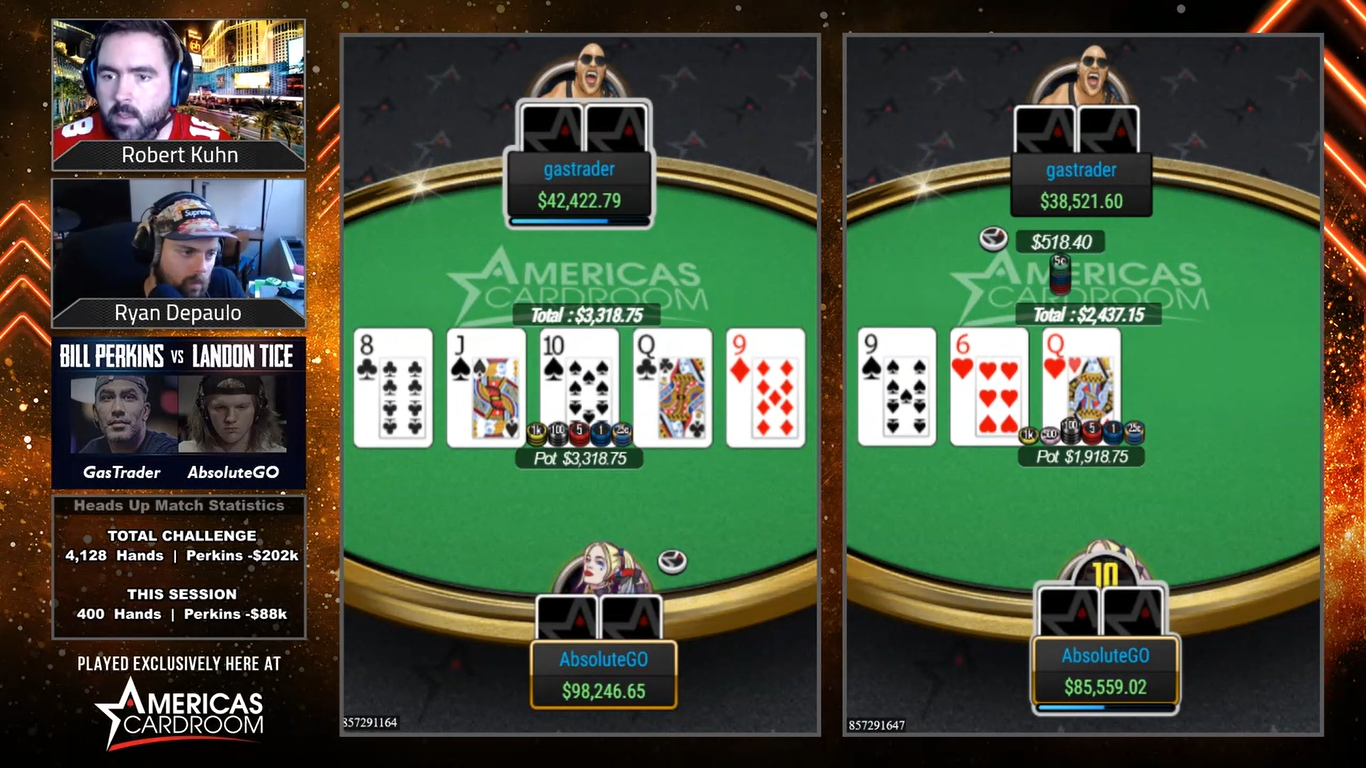 The poker players planned to complete 20,000 hands at $200/$400 stakes on Americas Cardroom. Given that Perkins is an amateur, Tice agreed to pay back nine big blinds per 100 hands dealt as a handicap, which totaled $720,000 if the match were to go the distance.

Writing on the wall

After June 29’s session, Tice gave serious thought to whether he should continue on or call it quits. On Sunday, he made the decision, which he shared on Twitter.

Regarding the Perkins Challenge:

As a team we decided to surrender. We see no other way to proceed. He’s a much stronger player than expected and I took on more than I could handle.

It was an unreal experience to be a part of, maybe in the future I’ll try again.

“Regarding the Perkins Challenge: As a team we decided to surrender. We see no other way to proceed. He’s a much stronger player than expected and I took on more than I could handle. It was an unreal experience to be a part of, maybe in the future I’ll try again,” Tice wrote.

Prior to the match, Tice expressed confidence he could beat the handicap against a player he expected to be much weaker than he showed. Perkins took on some poker coaching for the match and performed at a much higher level than most anticipated.

The writing was on the wall for Tice following Tuesday’s rough session. The 22-year-old pro, whom some consider to be a future star in the game, was in a battle he was unlikely to win. Tice invested some of his own bankroll for the challenge, but had some big backers who were hoping he’d bring them a nice profit.

By conceding, Tice isn’t required to pay the entire $720,000 to Perkins. Instead, as he wrote on Twitter, he owes a rebate of nine big blinds per 100 hands they played, along with an undisclosed side bet. That comes out to around $33,000 plus the side bet. Perkins credited his poker coaches following the agreement with Tice.

Thanks for the competition. It was great spot to force an old dog to learn new tricks. The team @PokerHybrid took a complete fish & turned me into a strong player in 3 months so I have to thank them & @larasebastian for giving me time to study. @LandonTice will crush the future https://t.co/pf3q6uw26f

Doug Polk, one of the top heads-up players in the world, was predictably quick to respond to Tice’s decision to surrender so early. But he didn’t pile on, at least not yet.

“Surprised to say the least. So early on, expected this to go the distance unless there was real carnage,” Polk wrote on Twitter.

Polk completed a 25,000-hand, heads-up No-Limit Hold’em challenge against Daniel Negreanu at the same stakes — $200/$400 — earlier this year. He won $1.2 million over the course of the highly-publicized battle, and Negreanu never seriously considered quitting. Instead, he stuck it through until the end, earning the respect of his long-time rival.

Tice, however, isn’t self-bankrolled or near as wealthy as Negreanu. So, he has others (investors) to take into consideration when determining his best course of action.

Yeah, the only issue here is Perkins is such a nice guy in his day to day. He let the kid off (or rather the kids bank} My question is , what about all the people that fell for Landon’s trash talking and the hype from the community hoping to make free money and bet on LT?? Just like in business the con men get off scott free and the regular people who adore them suffer the consequences. Thank goodness I never fell into the fan boy category. Especially when it comes to wagering my money.