There are few tournament festivals in the Midwest as big and prestigious as the annual Chicago Poker Classic, which takes place at Horseshoe Hammond just east of the Windy City.

This year’s edition was no different and thousands of players braved the winter weather to partake in 14 events. 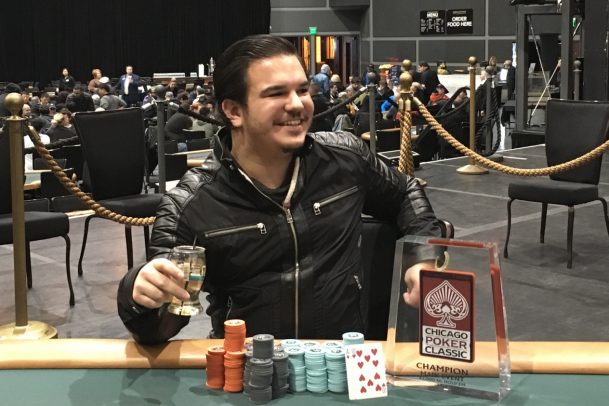 The 2017 Chicago Poker Classic $2,000 Main Event attracted 651 entrants and created a total prize pool of $1,156,176. It took him two bullets, but Lance Howard, a software consultant from Detroit, managed to outlast the competition to take down the $231,237 top prize, which also came with a seat into the 2017 World Series of Poker Main Event.

Howard began Day 2 with a monster chip lead, and he never relinquished it as he simply stacked chips while sipping on glass after glass of Copa Di Vino (the fancy wine by the prepackaged glass as seen on ABC’s Shark Tank).

“I wasn’t drinking on Day 1,” Howard told the Chicago Poker Classic Blog about the win. “Then after dinner, I get one of these, win that hand, and ever since then I’m thinking, ‘every time I get one of these I add 20-30 percent to my chip stack.’ Since Level 11, I’ve been telling everyone at my table, ‘You gotta get this. If you get this, you start winning.’ And they ignored me, and I just kept winning.”

Eventually he made it all the way to heads-up play holding a 4:1 chip lead over Artem Zverkhovskyy. In what would be the final hand of the tournament, Zverkhovskyy shoved with ace-six and ran smack dab into Howard’s ace-ten. No six meant Zverkhovskyy, who had qualified via a $240 satellite, had to settle for a $142,325 consolation prize and a seat into the 2017 WSOP Main Event.

Another player to make it to the final table was MSPT FireKeepers champ Aaron Massey, though the hometown pro had to settle for ninth place after coming in short stacked.

Another highlight from the 2017 Chicago Poker Classic was Jake Hommen topping a field of 1,793 entrants to win Event #1 $360 NLH Opening Event for $87,281. Primarily a low-stakes cash-game grinder, the Wisconsin native was quick to thank his friends in the online Facebook group Madison Poker Forum.

“I would like to give a big thank you to everyone who has been there for, with or against me throughout the years,” Hommen said on social media the day after his win. “As much as this is an individual sport, I could not have done it without the help from some really great poker friends. I’ve learned so much from a lot of people in this community. My poker journey is far from over but this was definitely a big stepping stone for what I have planned for my future.”

The top eight players in that tournament, which included MSPT Season 7 Meskwaki champ Ken Komberec (5th for $20,000), were all awarded a $2,000 Chicago Poker Classic Main Event seat in addition to their prize money.

A couple events later, Brian McDaniel topped a field of 126 entrants to win Event #3: $400 Pot-Limit Omaha for $11,711, a feat accomplished one year after finishing runner-up in the same event for $9,369. PLO tournaments seem to be his forte as he also won a World Series of Poker Circuit ring in the variant at the 2015 Harrah’s Cherokee stop.

Here’s a look at all those who won titles during the 2017 Chicago Poker Classic:

*All winners also received a $2,000 seat into the Chicago Poker Classic Main Event.