Ladbrokes Poker Out of Canada by October 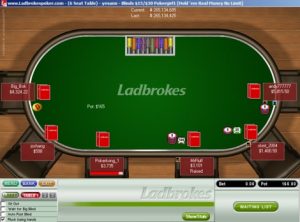 Ladbrokes has announced that it will no longer operate its online poker site in Canada starting in October. (Image: Ladbrokes screen shot)

Ladbrokes Poker has enjoyed a good run in Canada. But with the United Kingdom’s new gambling regulations going into effect next month, it appears that Ladbrokes may simply not be comfortable staying in a nation where they aren’t licensed, even if it isn’t exactly clear that they’re unwanted there.

Ladbrokes Poker has announced that they will stop accepting new deposits or any wagers from players in Canada beginning on October 1. Players will then have a 30-day window during which they can withdraw their balances, and there has been no indication that there should be any unusual problems for Canadians who want to recover their funds. Bonuses and other special promotional offers that haven’t been cleared by October 1 will be forfeited.

According to Ladbrokes, the decision comes after a “review of Canadian igaming regulations.” But while this may be technically accurate, the date leaves plenty of speculation as to why the major UK bookmaker would choose to suddenly close their poker room, a well-respected skin on the iPoker network, in the Canadian market.

The most likely culprit could be the new licensing requirements in the UK, which also go into effect on October 1. While most of the talk about the new laws has been about the new point-of-consumption tax for operators, there’s also a provision in the licensing process that deals with where operators offer their services worldwide.

In particular, UK regulators want operators to provide some sort of legal justification for offering online poker or other Internet gambling in jurisdictions where they do not have licenses to do so. If more than three percent of a company’s revenues come from such markets, a failure to give a convincing legal basis for operations in these nations could result in having a license denied.

Ladbrokes, however, has tried to downplay this element of their decision. They point out that the company only made about £200,000 ($327,000) in revenue from its Canadian operations, which amounts to less than 0.5 percent of their total revenues.

“We continually review the markets we operate in based on legal advice and Canada is not a material contributor,” Ladbrokes said. “The vast majority of our business is UK and Ireland, with a focus on Australia, Spain and Belgium for the future.”

But it still may be a part of a strategy to focus on ensuring licensing in the lucrative UK market, even at the expense of losing some “grey market” revenues in the process. Several other online poker sites have quit offering real money play to Canadians over the past year, including Betfred and InterPoker. Other companies have publicly considered such a move as well, whether because of UK licensing concerns or simply over uncertainty about their legal status in Canada.

Not everyone is taking such steps, however. William Hill, a company that is synonymous with gambling in the UK, is still offering its services in Canada. That comes even after the bookmaker decided to stop operating in 55 countries earlier this year for “regulatory reasons.” Meanwhile, PokerStars has said it plans to stay in Canada even after its purchase by Canadian company Amaya Gaming.

I hope WilliamHill continues to offer its services in Canada. A day after the Ladbrokes news release I received a message on my WillHill acccount > “Important Service notification: changes to Terms and Conditions & Privacy Policy as of Oct.1st
(I’ve never ever received a message in my account on WillHill in the past 4years & I play on there pretty much daily)

Perhaps it has less to do with UK regs than it has to do with what seems to be the imminent transforming of pro-line into a full fledged sportsbook,with Rogers and Bell being asked to participate?Never mind pending bets,have you tried to withdraw your principal yet?