The Bicycle Casino is back with its “Quantum” tournaments and not everyone is pleased. A group of Los Angeles poker players is boycotting these events, saying they’re unfair and lead recreational players into shark-infested waters. 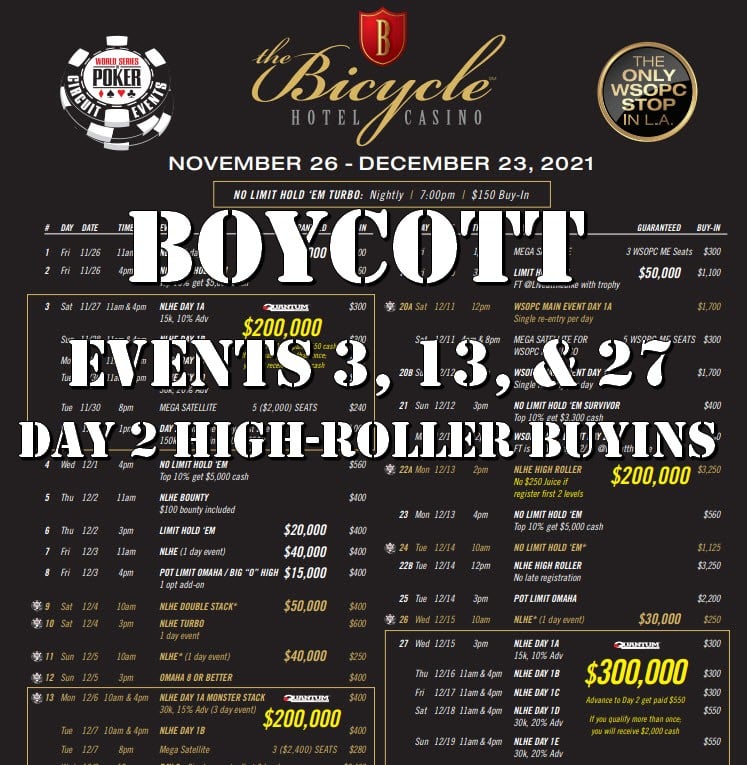 A flyer circulating on Facebook is hoping to snuff out a popular tournament format at LA’s Bicycle Casino, saying events that allow players to buy in on Day 2 of a tournament are bad for the poker ecosystem. (Image: Facebook/LARounders)

On Wednesday, as part of a WSOP Circuit series, the Bike will host Event #27, a No-Limit Hold’em Quantum tournament with buy-ins ranging from $300 to $2,000, and a $300,000 guarantee. It’s the last of three, non-ring WSOPC events that a group of LA rounders is telling other players to avoid.

“The Quantum format is probably the worst ‘innovation’ in the history of tournament poker,” says LA rounder Heath Mendelson. “It hurts recreational players and favors professional players (and the house) significantly more than any other tournament format — both from a money and time standpoint — and will do significant damage to the poker ecosystem in any city.”

The creators of the tournament format disagree and believe the numbers back them up. Event #3, the first boycotted event of the series, came with a $200,000 guarantee, which it more than tripled. Critics, however, say that’s part of the problem.

Quantum tournaments use a patented format and payout structure featuring different buy-in amounts, multiple start times, and varying starting chips stacks. They were introduced nearly 10 years ago and have since grown in popularity, but not without controversy.

The hook is they allow players to put up just a few hundred dollars for a chance at relatively massive paydays. The catch, according to a group of players on the Rounders Facebook page, is that it almost never turns out that way.

There are three different buy-in tiers. In the Bike’s current set of Quantum events, players can enter on different Day 1s for buy-ins of either $300 or $550, or enter on Day 2 for $2,000. In such events, the $300 entries start with 15,000 chips, with 10% of the players advancing to Day 2. Players who opt to buy in for $550 start with 30,000 chips, knowing 20% of them will advance. More expensive buy-ins equate to more chips and a greater likelihood of advancing further.

In theory, this gives players with lower bankrolls chances to be part of a larger guarantee event and compete for payouts that would otherwise be unheard of for a buy-in of a few hundred dollars. The Bike’s Event #3, for example, reached a prize pool of $641,000, with first place paying more than $100K — what a spin-up for someone who entered for just $300.

“Quantum suits different players and different buy-in levels,” Bike Tournament Director Mo Fathipour, who created the Quantum format, told CardsChat. “The alternative is multi-day tournaments like at the Venetian or other casinos. But I have some players, businessmen, who play only the last day because they don’t want to waste their time.”

While that may be desirable to some, critics say a tiered rake structure makes these events a bad investment. Esssentially, the bigger your buy-in, the less rake you pay. Players who bought into the $400 flight on Dec. 8, for example, paid 17.5% rake. But players who bought in on Day 2 only pay 10%, meaning the amateur is giving the house nearly double.

“Dealers are more expensive now and so are costs,” says Kevin Pound, co-owner of Quantum tournaments. “There is a basic cost of running a tournament, regardless of buy-in.”

These multi-flight low buyin events lure recreational/amateur players in to build the guaranteed prize pool for the casino. Who then allow pros and high-rollers to buyin on Day 2 and give them 150,000-200,000 starting chips for Day 2.

Day 2 buyin players often fill Final Tables for these events. Don’t help the casinos fill their guarantees and then allow pros to swoop in with big Day 2 stacks.

Do not volunteer to be dead money.

With so many amateurs eliminated in earlier flights, Day 2 fields tend to be much sharkier than usual and, therefore, harmful to the poker community’s sustainability. At least that’s the contention of Quantum boycotters, who would rather see more recreational-player money stay at lower stakes tables.

They argue that players who buy in on Day 1 (non-pros mostly) and advance do so with a disadvantaged chip stack and thus, hardly stand a chance of taking home a significant share of the prize pool.

Many people are under the impression that if they do well on Day 1, they will have around the same amount of chips (or possibly more) than one of the Day 2 entrants, according to boycott organizers.

“Prospective Day 1 players are manipulated by ‘seeing’ the Day 2 buy-in cost, and then lured in by the appealing lower Day 1 buy-in amount,” Wayne said. “This ignores the obvious advantage of the Day 2 player entering with a chip stack that assures advantageous play over the scores of Day 1 players who grinded into Day 2 with disadvantaged 10-20BB stacks.”

Fathipour disagrees, saying the events are designed so everyone has the same amount of chips coming into the final day.

Pound, like Fathipour, insists that the complaints simply don’t add up. “I’ve listened to player feedback and went back and did a historical analysis of their complaint, and it’s not true,” Pound said. “They’re not familiar with the end result.”

He pointed to a Quantum event held at the Hustler casino recently in which zero Day 2 direct buy-ins made the final table.

Wayne’s calls for a boycott so far get a handful of comments and retweets when he posts about the ills of Day 2 buy-in events, his push hasn’t exactly gone viral.

“My reason for the boycott is the poker community has been silent, which poker room managers incorrectly view as approval,” Wayne said.

His biggest concern is the spread of these events to other casinos, as it already has to Hustler, Gardens, and Oceans 11 in Southern California alone. These Quantum events started at the Bicycle Casino, where managers own the rights to the format and license it (translation: collect a fee) to the other casinos.

“Poker players are difficult to rally because by nature they are individually motivated and have zero interest in community,” Wayne said. “Without a community-aware conscience, it is difficult to motivate players. They are unaware they have the collective buying power to induce change.”

I call BS on Kevin trying to lay this at the feet of dealers.
…..“Dealers are more expensive now and so are costs,” says Kevin Pound, co-owner of Quantum tournaments. ….
How are dealers more expensive now? Is he paying the dealers expenses when they travel? Is he paying them a premium when they work for him? Doubtful.
Dealers earn a majority of their money from the tips and part of the vig the house charges.
The portion of the vig for the dealers can vary based upon management decisions. The rest of the vig goes towards management.

Recreational and amateur players are being exploited and manipulated by this format.

Manipulation works when the target does not know they are being manipulated.