No, Martin Scorsese wasn’t at the Bicycle Club on Tuesday directing Casino II. Federal agents raided the legendary Southern California card room over an apparent criminal fraud investigation. Sam Rothstein and Nicky Santoro were nowhere to be found. This was a real-life situation. 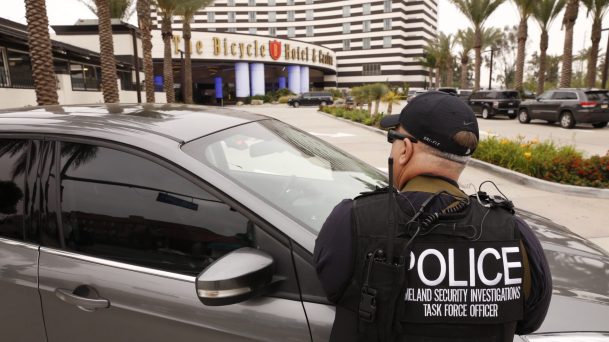 Authorities stormed into the Bell Gardens casino at 7 am, instructing all patrons to exit the building without removing any casino chips from the tables. The purpose of the raid was to look into potential money laundering, according to Los Angeles Times’ law enforcement sources close to the investigation.

By the wee hours Wednesday morning, it was back to business as usual at the popular room. An official statement from the Bike, as it’s familiarly called, clearly tried to downplay the raid and assure customers that there was nothing to see there.

“We are serving our customers and resuming normal operations immediately. Our priority is to provide a safe and fun environment for our guests,” the statement read. The casino also emphasized today that it was cooperating fully with authorities.

Members of the Los Angeles High Intensity Financial Crime Area Task Force conducted the raid. Both entrances to the casino’s parking lot were blocked on Tuesday, and customers were asked to leave all chips on the table. No one was permitted to enter the building during the investigation.

Agents were spotted chatting with casino gamblers who were understandably concerned for their bankrolls. A spokesperson for the US Immigration and Customs Enforcement (ICE) refused to say much due to the ongoing investigation, but ICE’s regional director Virginia Kice informed the media that a “search warrant issued by a United States magistrate judge was filed under seal.”

No one has been charged with a crime. Authorities have not released names of the suspected subjects of the money laundering inquiry. It’s unclear if gamblers or casino employees are being investigated.

Impact on the Community

The Bicycle Casino has a longstanding history in the Bell Gardens community, a city near Los Angeles. This 185-table poker palace is home to the popular Live at the Bike livestreamed cash game show, as well as the annual WPT Legends of Poker tournament.

Bell Gardens relies heavily on revenue generated from The Bike. The casino employs hundreds of locals. The investigation has some worried about being out of work, including one employee who stood outside the casino during Tuesday’s raid.

“Well as of right now, we’re not sure,” an employee told ABC 7 Eyewitness News. “We don’t know what’s going on so we’ll find out [on Wednesday].”

A concerned local, also interviewed by ABC 7, shared the employee’s sentiments. The Bicycle Club customer praised the people who work for the casino and feared that “1,000 people are now out of their job.” He also called Tuesday’s happenings, “devastating to the community.”

The Southern California cardroom was a hot topic on Twitter following the raid. Some poker players feared the worst, while others cracked jokes. Todd Brunson, as always, found humor in a serious situation.

“Hey @MattGlantz I deposited that 50k I owe u in ur account at the bike last night,” the son of poker legend Doyle Brunson posted.

As of this writing, it’s unclear if customers forced to abandon their chips on Tuesday have been allowed to retrieve them yet.