To celebrate the holiday this past weekend, 888poker hosted the 2017 888Live Easter Edition London Main Event at Aspers Casino Stratford. 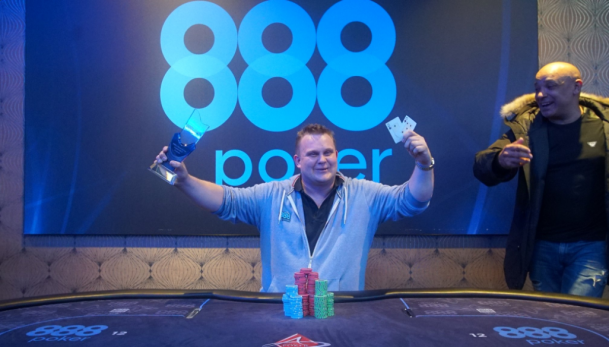 After Kanan Farzaliyev exited as the 888Live Easter bubble boy in 37th place, the result of his pocket sevens falling to a set of four, the final 36 players were guaranteed a minimum £815 ($1,040) payday. The two most notable players in the money were 888poker Ambassadors Sofia Lövgren and Chris Moorman, and as fate would have it the former busted to the latter.

“I’m always kind to my friends so I decided to give Chris Moorman my remaining chips,” Lövgren jokingly tweeted afterward. “GL to him now!”

Eventually, Panunesco exited in third place after his picket nines fell to Pregowski’s ace-queen, and that is when action heated up. Over the course of the next three hands, the duo move all in blind, which resulted in the chip lead changing every time.

In the fourth, and what would be final hand, the shorter-stacked Jordon was all in blind holding the 10♣4♥ and Pregowski had him at risk with the 5♥2♣. The J♣9♣5♠ flop gave Pregowski the lead, but Jordon picked up gutshot outs on the 7♦ turn. Unfortunately for him, the J♠ river was a blank and he had to settle for runner-up.

“The whole idea behind it was that every tournament when you come to heads-up, everyone sits there all serious for hours and hours,” Pregowski told PokerNews after the win. “Someone mentioned earlier that a tournament took ten hours heads-up before it finished. So, we thought we’d just give it a spin and see what happens. Let the cards decide, not the players, and that’s what we’ve done!”

How much was entry for this tourney???

It says right in the article, second sentence.