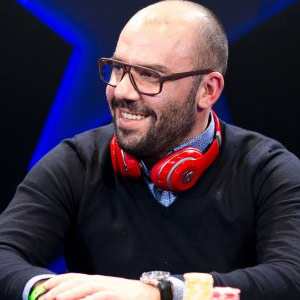 Most poker fans don’t know the name of Sotirios Koutoupas, but the Greek player made his mark on the European poker circuit by defeating longtime pro Eugene Katchalov in a tough heads-up match at the European Poker Tour stop in Deauville. The €5,300 buy-in No Limit Hold’em Main Event drew some of the best players in the world, yet Koutoupas came out on top in the end and took home €614K.

The first two days of the EPT Deauville Main Event consisted of players registering and many of them also hitting the rail. With two days to get in on the action and registration actually open until the start of Day 2, the final numbers eventually climbed to a total of 671, which was less than the previous year but put the prize pool up to €3,220,800. It was enough that the top 95 players could be paid from that amount.

Day 2 brought back 385 players and the choice few who chose to join the action with fresh stacks. That number dropped to 137 players by the end of the night. Dario Sammartino was in the chip lead with 427,700 chips, followed by Zimnan Ziyard with 392,500, then Norbert Szecsi and Jonathan Abdellatif. Eugene Katchalov was in fifth place with 345,700 chips and Sotirios in seventh with 317,100.

Through the Money and Still Going

The third day of action saw the money bubble burst, which happened when Stephen Chidwick’s pocket kings were cracked by the A-K of Tobias Wagner. The rest of the players were guaranteed at least €9,500 for their efforts, and some like Alex Kravchenko and Patrick Bruel cashed before the night ended with 41 players. Ekrem Sanioglu was on top of the chart with 1.3 million chips. Second was Katchalov with 1,194,000 and fourth was Koutoupas with 1,129,000 chips. Day 4 was a quick one, thinning the field to 16 players and finding Koutoupas as the overall chip leader with 2,695,000 chips, with Katchalov falling to tenth place.

Day 5 played down to see JP Kelly exit in tenth place. It was Koutoupas with pocket eights who eliminated Florian Ribouchon and his sixes in ninth place, which was worth €50,530.

The final table was set for February 1 as follows:

Not only did Koutoupas enter the final table with a substantial chip lead, he was the first to eliminate an opponent, obliterating the pocket aces of Lerust with K-Q. Price stepped in to eliminate De Benedettis in seventh place, and Muratov was crippled by Price before being eliminated in sixth place. Meanwhile, Katchalov became the short stack and Law began to climb the leaderboard, though Koutoupas remained the chip leader.

Katchalov then doubled through Law to climb into second place. Law was in trouble but doubled through Heath. Shortly after, though, Law moved with pocket aces against the A-K of hearts of Koutoupas. The flop then brought all hearts to give Koutoupas the flush and leave Law out in fifth place. Heath was next to face Koutoupas with A-8 against K-J. But a jack hit on the flop eliminated Heath in fourth. Price then pushed with K-9 but ran into the K-Q of Koutoupas to end his run in third place.

Koutoupas took 15.05 million into heads-up action against the 4.99 million of Katchalov. The latter started strong and kept trying to climb; he even managed to take the biggest pot of the tournament and reach nearly 6 million chips. However, Koutoupas stayed strong and eventually moved into a four-to-one chip lead. Katchalov then looked down at A-K, and when Koutoupas shoved with A-3, Katchalov called and looked hopeful for the double-up. But the flop brought two threes to give Koutoupas trips, and that was the end of the tournament.

Katchalov just missed winning the Triple Crown of poker, having already won WPT and WSOP titles, only needing an EPT to complete the circle. Koutoupas redeemed himself after having finished second in the previous season’s EPT Prague Main Event. He won this EPT title and became the first Greek player to ever do so.