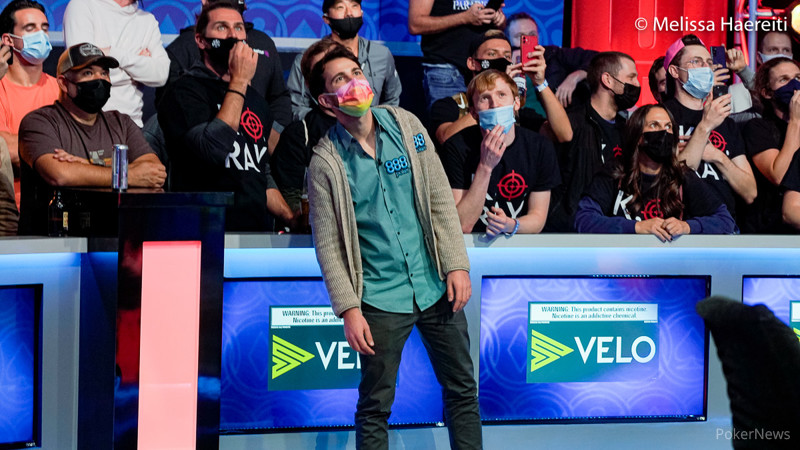 Koray Aldemir sweats the action from the rail at the WSOP Main Event (Image: WSOP/Melissa Haereiti)

While last night’s play was scheduled to stop with four players left, WSOP staff decided to play until just three remained. Soon after, a massive hand took place that could have resulted in a double knock-out.

Instead, it tripled Oliver into second place and put Joshua Remitio on the ropes and soon out in fourth place.

Oliver gets his diamond

With blinds at 800K-1.6M, and a 1.6M ante, Oliver sitting short with 20.5 million, pushed all-in with J♦ 9♦. Remitio pushed his remaining 27.2 million in with AJ off-suit, and Aldemir made the easy call with pocket queens.

Both Remitio’s and Oliver’s hands improved after T98 fell on the flop, but only one of them was a diamond. The 3♦ on the turn made Oliver’s rail start to stir, and 7♦ on the river made them explode in joy and disbelief.

The moment @jackabet triples up 4 handed at the WSOP Main Event FT. What a moment pic.twitter.com/f5WwiJC7li

Remitio survived with the rivered straight, but his 13.4 million ended up in Oliver’s stack just one hand later after he moved all-in with J♥ 7♥, which lost to Oliver’s A2 when an ace hit the flop.

Before cashing for $2.3 million on Tuesday night, Remitio’s biggest tournament cash was for $650 in a $200 tournament at Talking Stick in 2019.

Ozgur Secilmis was eliminated in fifth after moving all-in with K♥ 5♥ from under the gun. Aldemir tanked for a bit before calling with pocket nines, which held. The Turkish player won $1.8 million.

Hye Park was eliminated in sixth by, you guessed it, Aldemir after he limped from the small blind with two black sevens, and then shoved his remaining 20.6 million after Aldemir raised with AQ. A queen on the turn doomed the Las Vegas-based high-stakes grinder and former Marine. He won $1.4 million.

Aldemir came into the final table as a significant chip leader with 140 million by seemingly summoning the cards he needs to win enormous pots. It happened again at the final table against Alejandro Lococo, who was second in chips with 69.5 million.

With black pocket 10s, Lococo raised and was re-raised by Aldemir with two red nines. A miracle flop of  JJ9 came out, and Lococo called all-in on the river to vault Aldemir to more than 200 million.

Two gone right off the bat

Both Jareth East (8.2 million) and Chase Bianchi (12.1 million) came to the final table short on chips. It was Bianchi, the only player at the final table with a bracelet, who was first to go.

In the fifth hand of the final table, Bianchi picked up KQ offsuit in the small blind and jammed all his chips after Oliver raised and Holmes called from the small blind. Holmes folded. Unfortunately for Bianchi, Oliver held AK. Bianchi earned $1 million for his incredible Main Event run.

East made an extra $100K by outlasting Bianchi by just one hand. He was eliminated on the sixth hand after shoving his last 6.3 million in chips with AJ. Holmes woke up to QQ. Although an ace hit on the flop, so did a lady, and that was hit for East.

Play is scheduled to continue at 1:30 p.m. PT on Wednesday.