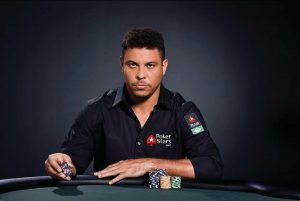 Sports superstar Ronaldo showed he can be nearly as dangerous on the felt as he was on the soccer field, cashing in the PCA Main Event. American Kevin Schulz took down the Main Event title for an almost $1.5 million cash. (Image: PokerStars)

The PCA is the year’s first great poker festival, and for many players, it’s the place where they’ll make their first major score of the year. And while PokerStars may not be available to Americans these days, they’re still more than welcome to win big at the PCA, as Schulz proved with his heroic win.

After a relatively quick final table, Schulz emerged as the winner of the 2015 PCA Main Event, earning the top prize of $1,491,580. It’s the biggest career cash to date for him, whose largest tournament cash before now had come from a 4th place finish in a $5,000 No Limit Hold’em tournament at the 2012 World Series of Poker. He now has just under $2 million in lifetime cashes.

Unlike in many big tournaments, the final hand wasn’t a pre-flop all-in confrontation, and instead featured another kind of drama. Facing Peruvian player Diego Ventura in heads-up play, Schulz faced a check-raise all-in on a Q64K6 board. Schulz thought for several minutes before finally deciding to make the call with K3, giving him two pair (kings and sixes). Ventura then turned over T4 of diamonds for a weaker two pair, making Schulz the victor.

One of the biggest surprises of the Main Event was the performance of Brazilian soccer legend Ronaldo, who managed to be the final sponsored PokerStars player to remain in contention. He made it all the way through to Day 4 before being eliminated in 26th place, as his KT couldn’t hold up against pocket queens.

Still, Ronaldo won $42,180 for his efforts: perhaps nothing compared to his earnings as a professional athlete, but certainly a great step towards validating his poker skills.

There was plenty of other action at the PCA, too.

In the $25,000 High Roller event, Ilkin Garibli surprised many by taking down the title. While professionals usually dominate in these high-stakes events, Garibli is an amateur, making his $1,105,040 prize even sweeter.

In heads-up play, Garibli made a deal with Joe Kuether to split the prize money nearly evenly (Kuether won $1,050,000), but the two would go on to play a 2.5 hour battle in order to determine who got the title and the watch that goes to PCA winners.

But not all of the prizes went to unknown names in the poker world.

Just before the end of the PCA, Jonathan Duhamel took down an event of his own, winning the $5,300 No Limit Hold’em 8-Handed Turbo tournament. The 2010 World Series of Poker Main Event champion won $116,738 for his victory.

Another significant victory was that of Paul Volpe, who has now won three European Poker Tour (EPT) side events in his career (the PCA is considered part of the EPT, despite the fact that it does not take place in Europe).

Volpe took down a $2,200 No Limit Hold’em tournament, which goes into his trophy case alongside two wins at the EPT 9 Grand Final. Other notable winners during the PCA include Justin Bonomo, who won the $5,000 Pot Limit Omaha event, besting a field of 27 players to win $48,450.