Kevin Roster, the poker player who inspired the poker community with his fearless battle against sarcoma, passed away on Friday afternoon, peacefully, on his own terms, at age 36. The poker enthusiast died just weeks after living out his final wish of competing in the World Series of Poker. 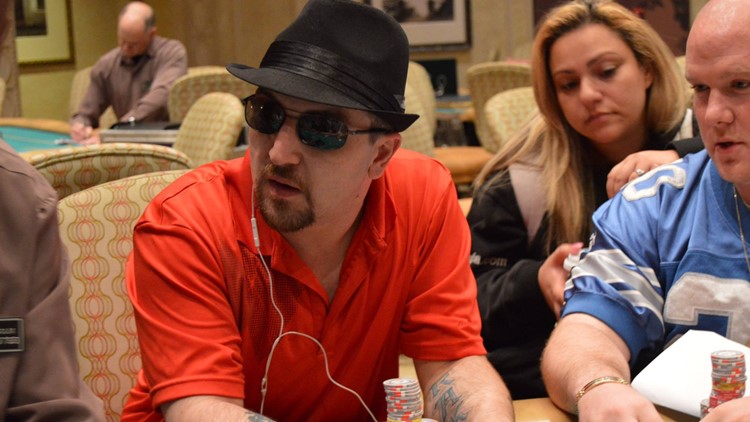 Roster leaves behind a wife and 10-year-old son.

He spent his final weeks spreading the word about sarcoma, an uncommon cancer that forms in bones and soft tissues, growing tumors that eventually damage vital organs. He chose to take advantage of California’s right-to-die law so he could go out on his own terms instead of continuing to suffer. The poker grinder admits his decision, which is illegal in most states, was controversial. But it’s his life and his decision.

This is Kevin's caregiver, Kevin passed peacefully and is now out of pain, he wanted you to know that even though he never met many of you, that you helped him cope with tough days at the end #sarcomaawareness #kevinracks #wsop50

Poker Player Until the End

Playing in the WSOP Main Event was a dream of Kevin Roster’s, much like any poker player. But $10,000, to the average grinder, is a bit pricey. After his story spread in May around social media and in the mainstream press, 2012 world champion Greg Merson stepped up and bought the dying poker fan into the prestigious event.

Roster didn’t cash and was forced to call it quits due to health issues early. But he had a blast and was able to cross an important item off his bucket list.

Those who followed Kevin’s journey this summer knew his time to go was fast approaching. He still wasn’t ready to quit playing poker, however. In fact, earlier this week, he competed in a live-streamed cash game session at Stones Gambling Hall in northern California.

But despite still (barely) being able to play cards, he was suffering physically. In a video posted on a “goodbye” blog post, Kevin said he was tired most of the day, struggled to breathe, and used morphine “six or seven” times per day just to make it through a poker session.

The fight to survive had become too painful for Roster. With his health rapidly declining, the poker pro chose to take advantage of California’s right-to-die law on Friday and was assisted in dying by a medical professional.

“I get to die the way I lived, which is in charge,” he told Sacramento’s ABC affiliate.

Roster admits he could have held on a few more months, but chose to die peacefully instead of suffering with his terminal illness any longer.

Over the past couple of days, he expressed gratitude towards the poker community for sharing his story and spreading the word about sarcoma. Even right up until the end he was able to keep his sense of humor.

I know I’m dying in a few hours gotta leave y’all on a humorous note. I just put on some shorts I haven’t worn since Vegas. I never use my left pockets since the surgery Unzipped my left pocket. Bang $1300 Somehow still winning. Love y’all #sarcomaawareness #kevinracks #wsop50

Roster’s left leg was amputated in April. He suffered from a rare form of sarcoma that made his tumors accelerate rapidly. He expressed frustration with doctors that originally told him he was in the clear, and suggests he could have beat the disease had they accurately diagnosed him.

Roster spoke with Joe Ingram earlier this summer in a lengthy “Poker Life Podcast” episode that we highly recommend.

Despite knowing his time on earth was limited, Roster still brought positive vibes to the 2019 WSOP. The poker community, and other cancer patients, lost a valuable member. He will be greatly missed. 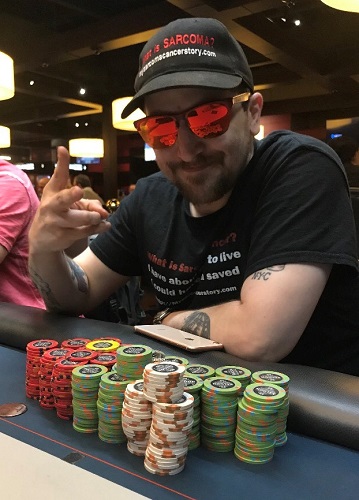 Peace out: Kevin Roster played the hand he was dealt like a champ. (Image: Sarcoma Foundation of America)

I wish I was able to meet him… Played in the same tournament..I will remember and think of him when I suffer a bad beat at the table and smile knowing he would be glad that I was able to remain inspired by him…!!! God speed and you are free of pain looking over your young son as his guardian angel…REST IN PEACE FOR YOUR WERE TAKEN AWAY TOO EARLY AND TRULY WERE AN INSPIRATION FOR ALL THE POKER COMMUNITY…OUR LOSS HEAVEN’S GAIN…!!!

I never met Kevin but I heard about his story before headed out to Vegas to play a couple of events. My condolences go out to his loved ones he left behind. Such an inspiring message he sent out. By continuing to live even though he knew his time was short. It appears he was “Allin” in this life. I tip my hat to you sir.

God Bless his family – May the lord bless you with comfort and heal your aching hearts. I will have you in my prayers.

My we all live each day to the fullest and not take it for granted.