Kevin Maahs was the top story from Day One at the 2019 WSOP Main Event final table, and not for the right reasons. The Chicago Cubs-hat-wearing IT specialist caused a stir on social media for his odd habitual tanking in obvious fold situations. 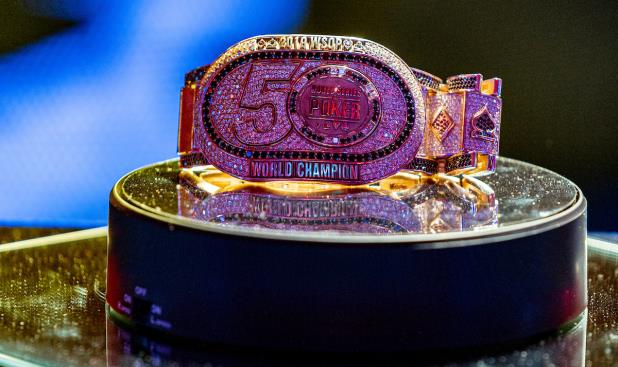 Only five poker players are eligible to win this beautiful piece of jewelry. (Image:

Fortunately, for those watching on ESPN2 Sunday night, Maahs wasn’t the only story. Dario Sammartino showed up dressed to the nines, and chip leader Hossein Ensan played an exceptional game of poker. And, of course, we saw a few exciting all-ins. So, despite one individual’s incessant tanking, it was a solid start to the three-day final table.

Play began at 6:30 pm PT (7 for TV viewers) with nine players all guaranteed $1 million but vying for the $10 million first place prize and the title of poker world champion. Within the first hour, two of those now wealthy players were gone.

On just the sixth hand of the session, Milos Skrbic ran A-J into the A-Q of Garry Gates and was quickly eliminated in ninth place ($1 million). Moments later, Timothy Su lost a race with a short stack against the big stack Hossein Ensan. The good news for Su is he earned $250,000 extra for less than an hour of poker on Sunday.

Next to go was Nick Marchington who shoved a suited A-7 into Ensan’s pocket kings. Marchington didn’t get any help from the five community cards and was sent home in sixth place for $1,525,000.

Zhen Cai had a rough day on the felt. He attempted to be the aggressor, a smart strategy in Texas hold’em, but constantly ran into a monster hand seemingly every time he raised pre-flop. He was put out of his misery on the final hand of the session when he lost a race to Kevin Maahs. Cai earned $1,850,000 for his impressive run in the 2019 WSOP Main Event.

Maahs and His Incessant Tanking

The main topic of discussion on Poker Twitter during the first day of the final table was Kevin Maahs’ play. And not for the right reasons.

Many fans were annoyed of his habitual tanking, especially in spots where a fold was the clear decision. In one hand, while facing a pre-flop three-bet, he paused for 10-15 seconds before releasing his off-suit K-3, a hand that could have, any probably should have, been mucked instantly. He certainly didn’t win over any fans.

Kevin Maahs may be the worst and most annoying player to ever be featured on any poker event ever. He is single handedly making the #wsop unwatchable. Asks for opponent chip stack counts EVERY hand. And slow plays trash and folds 9 minutes later. Disqualify this clown

Hossein Ensan arrived at the final table with a massive chip lead and he continued to dominate although Garry Gates is closing in on his lead with five players remaining.

Sammartino might be the short stack, but he was certainly the best dressed on Sunday. The Italian pro who brought a rowdy rail with him to the Rio, arrived in style, with a snazzy black suit. The other players dressed like poker players.

But Ensan, who wasn’t dressed to impress, was the star of the show. The German-Iranian pro used his big stack to his advantage and often put pressure on smaller stacks. He avoided making costly mistakes and will enter Monday’s session with 173 big blinds.

Play resumes at 6:30 pm PT on Monday evening. You can catch all the action live on ESPN2 beginning at 7. We’ll have another live blog going throughout tonight’s final table session right here at CardsChat.

I don’t know if the constant tanking is an offence that can penalized, but certainly the other players at the table should stop responding to his request for their stack size EVERY hand. If this is his strategy to get under the skin of his opponents, it is working more on the viewers, including his rail.

They should call the clock every time that d-bag asks for as count or stalls. It is utter bullshit