Comedian Kevin Hart promised to “make poker fun again” when he signed with PokerStars last year as a representative for the site. In 2018, that apparently means going back to school, as the stand-up comic is offering poker lessons in a short “How to Play Poker” video series available on YouTube and at the PokerStars School online. 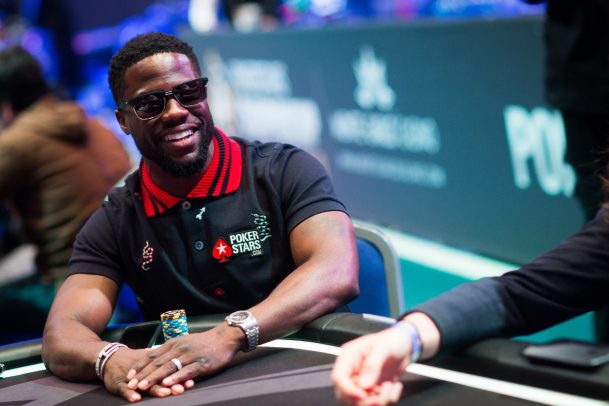 In these videos, you won’t learn game theory optimal (GTO) concepts, how to exploit your opponent’s weaknesses, or really anything that will help you take your game to the next level. But you will be entertained.

The 38-year-old actor has joined the PokerStars School, a free online poker training site with poker tips from players such as Daniel Negreanu. Hart’s new videos are available on YouTube and for those who sign up for the poker training academy.

In the first video, the comedian discusses poker etiquette, stressing the importance of having some class at the poker table.

“You must have poker etiquette,” Hart said. “Only act when it’s your turn. I can’t stand a person who acts out of turn. That ultimately means you’re not paying attention.”

Hart threatens to “pop” those who act before it’s their turn. But at 5’4” he isn’t much of an imposing figure. We’d suggest he pick on someone his own size, but there aren’t many poker players to choose from.

He also advises poker players to keep their cards on the table and to stack chips neatly. And, if you don’t, he will “pop you good.”

In the second video, he discusses the poker face. The first tip is “how to keep your cool.”

“By keep your cool, I mean when you see something you like, don’t show them,” he advises. “You got to avoid your nervous reactions to the flop.”

The final piece of advice is for poker players to maintain eye contact during a hand. He suggests players shouldn’t let an opponent “break you down,” and when an opponent stares, “you stare back.”

Kevin Hart is about as qualified to teach poker strategy as Larry Nassar is to give medical advice. But he has shown an ability to hold his own at the poker table against top pros.

During the 2017 $300,000 buy-in Aria Super High Roller Bowl, seated at the feature table, Hart made some impressive plays. Although he didn’t cash and was outclassed by most at the table, he certainly didn’t embarrass himself.

In a recent livestreamed high-stakes cash game session during the 2018 PokerStars Chamionship, the stand-up comic won one of the most memorable hands in recent history.

Facing a pre-flop raise from Mila Monroe, who was getting frisky with 6-2 offsuit, Hart made the call with K-3 suited. Neither player hit any piece of the board, but Monroe continued her aggression throughout, betting the flop and turn as if she was holding the nuts.

Hart refused to go away and made the call both times. On the river, which paired the board and didn’t help either player, Monroe again fired out a bet of £1,200 into a £3,355 pot.

The comedian refused to surrender and fired back a check-raise to £3,200. His opponent, also being stubborn, then moved all-in for nearly £15,000. Hart then made the call, with the best hand (king-high), thinking he had a straight.

After the hand, he felt bad about winning such a crazy hand, so he shipped her £15,000 to get back into the game. Nice guy, not a poker coach.

On the last PCA series on PokerStars, he played pretty well, opened a bluff on K-high. But his behavior at the table irritate (((

He is The Man! The best comedian in the world and now gonna take poker to the next level!
almost certainly he gonna bring a lot of players to poker!