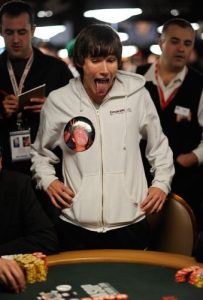 After a shocking illness during the 2013 World Series of Poker, Kevin “Phwap” Boudreau’s family gives the poker community an update on how he is recovering.

Last year, the poker community was shocked to learn that on June 14, Kevin “Phwap” Boudreau collapsed in a Subway parking lot during a dinner break at the World Series of Poker. As he was taken to the hospital, the situation looked dire, but friends and fellow players were united in their support. After several tense months, Boudreau’s family is giving an update on the young star’s condition.

It turns out Boudreau suffered a traumatic brain injury. With sudden bleeding in his brain, the hospital placed him in an induced coma. The addition of a stroke only worsened his condition. Kevin’s father, Jim Boudreau, spoke to PokerNews‘ Chad Holloway on the difficult weeks after the accident.

Told they would have to wait weeks-  or even months – before any chance of recovery, Kevin was in ICU for nearly five weeks. Kevin had rare infections and a delicate condition which made it difficult for the family to transfer him to a long-term care hospital in his home state of Colorado. Legal and insurance issues also posed problems for transfer.

Being home with his family, Kevin’s initial recovery process showed good signs. At first, he was using a ventilator to breathe and had no body control except being able to blink. A week at the first hospital and Kevin’s ventilator was removed and movement returned in his left leg. Jim said that over the course of five weeks and therapy limited to minutes a day, movement returned to Kevin’s left hand.

Lacking muscle strength in his back, neck and more, Kevin was put into a rehabilitation hospital after showing movement in some of his fingers. At the hospital, a dramatic increase in therapy saw Kevin undergoing treatment up to five hours a day.

Three months, another brain surgery and minor health problems saw returned functionality to the left side of Kevin’s body. With no movement or feeling on his right side, Kevin was still using a feeding tube and could only communicate with a “yes” or “no” using a thumb up or down. But then came some good news. Kevin was able to go home on December 11 after his six-month battle. Therapy continues at home with about 10 appointments a week.

The time at home has been positive for Kevin. Since returning, his right side is recovering and has begun to move. Both his right hip and leg can move forward, giving him the ability to walk, yet he still cannot bear his body weight. The feeding tube now only gives him water for hydration. Jim says his son often smiles and laughs even if only able to say a few words. And for those wondering, Kevin is even able to play online poker.

In June, Kevin will travel to the World Series of Poker to spend time with friends and see the event. He will go with his girlfriend Sam, who was with him through last year’s shocking events.

“We have faith and believe his recovery will continue and when doctors once said he could never be normal again, we believe he will walk on his own and talk at some point,” said Jim to PokerNews.

Members throughout the poker community have shown their support for Kevin and his recovery. Friends from across the country and even Canada have visited him. While the Boudreau’s insurance was able to cover many costs, a fundraiser began to help the family on the long process of recovery. Over $65,000 of a $50,000 goal have been raised so far to give more assistance to Kevin.

Kevin’s family remains hopeful that his recovery will yield positive results in the months to come. Doctors told the Boudreau family that recovery usually hits a plateau a year after the incident. Still, Jim thinks his son isn’t done fighting and that the he can make a true return to the WSOP.

“I can still remember Kevin’s first neurologist made a comment that essentially said that Kevin’s chance for a positive outcome from this at best would be about 10 percent,” said Jim. “What that said to me was Kevin played those odds every time he entered a tournament to make it into the money. I knew he would beat the odds in the biggest tournament of his life and he’s proving that success now, each and every day.”

Love to see CC post about my good friend Kevin, Kevin taught me how to play poker, a long time good friend and I was truly heart broken when this happened. Miss you Phwap! Miss our headsup late night battles on cake poker bud! Pray everynight for a full recovery man > much love from Toronto Canada Goes out to Kevin Sam and the Boudreau family. <3

OMG, I don’t know how I didn’t hear about this before. I used to watch Kevin’s youtube videos and when he stopped making them I just assumed he got bored of them. Wow, poor guy! I feel so terrible for him and his loved ones. I am glad that things seem to be looking up and will be sending positive vibes/prayers his/their way.