The World Poker Tour (WPT) has crowned its last champions before the World Series of Poker (WSOP) gets under on May 31. 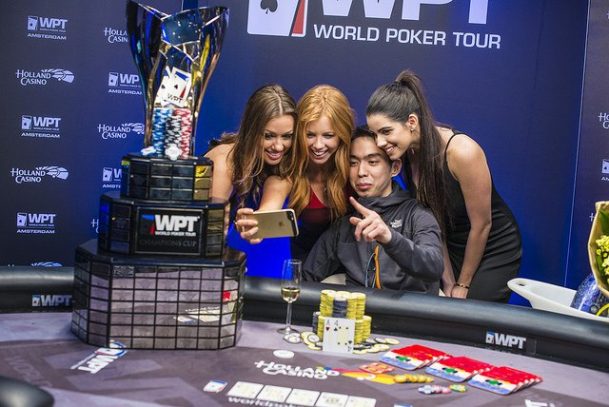 Kazakhstan’s Daniel Daniyar has become the latest WPT winner and will now play for the Tournament of Champions title. (Image: Twitter/@WPT)

With tournament fever starting to grip the poker world ahead of the summer festival in Las Vegas, the WPT has given another player a timely bankroll boost.

As ever, the field was a mixture of online qualifiers, local grinders and travelling pros. Making it into the money but just shy of the final table this time around were some notable Europeans, including Fabrice Soulier and Dutch native Noah Boeken.

When it came down to the final table it was Daniel Daniyar as the man to beat. Starting the finale in aggressive fashion, Daniyar managed to eliminate four of his five opponents in what proved to be a rollercoaster end to the tournament.

The defining moment of the final came with just three players left. After Daniyar three-bet from the big blind with 3♠ 6♠, Jan Jansma moved all-in with pocket kings. With Daniyar forced to call, it looked as though he was going to be left with just a smattering of chips when the dealer had finished.

Luck was on his side, however, as the 6♦ 3♣ 4♥ flop gave him the advantage. The 4♣ on the turn changed everything and gave Jansma the lead once again. That wasn’t the end of Daniyar though as the 3♥ on the river gave him an unlikely full house and sent Jansma packing.

Daniyar Leaves Amsterdam on a High

With the chip lead and the luck on his side, it looked as though Daniyar would run away with the tournament in the heads-up showdown against Louis Salter.

However, his hopes were almost dashed after he lost the lead multiple times before he finally took the title with A♥ 4♣.

With Salter almost out of chips, he made a desperate move with J♥ 8♣ but wasn’t able to catch a slice of the board to get back into the match.

After securing the remainder of his opponent’s chips, an elated Daniyar celebrated his $166,344 win and started to look forward to his first poker trip to the US for the WPT’s Tournament of Champions.