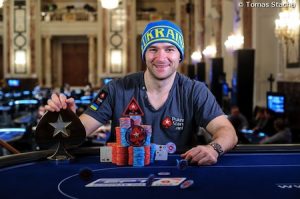 It’s our newsday for both Viennese poker tournaments, and Ukrainian players to take center stage in them.

Amidst the civil unrest of his original home country of Ukraine, Eugene Katchalov has persevered and continued to prove that he is a force in the world of tournament poker. Born in Kiev, Katchalov spent much of his youth in the United States, having immigrated to Brooklyn at the age of 10.

The event kicked off on March 22, played as a €2,000+€200 ($3,025 USD) No Limit Hold’em freeze-out tournament. With 455 players, the total prize pool was €882,700 ($1,213,800 USD) making it one of the biggest events played ever in Vienna. Originally, the event was to be played as a two-day tournament, but play extended so late into the night and conflicted the next day with the EPT Main Event that the tournament was spread out to a four-day duration.

Play had been pared down from 455 to just 66 players on Day 1. On the next day of that event, which was originally meant to be the final day, play went down to the final group at 10pm. The final table was a virtual United Nations summit, with seven different nations representing the final eight seats at the event. Diminik Panka, who has seen massive success already in 2014 with a 2014 PCA Main Event win for $1.43 million, busted out in eighth place. Other notable cashes were made by Team PokerStars Pros ElkY and Max Lykov, as well as Martin Jacobson and Shayam Srinivasan.

Eventually, the final table got down to the final two players at 3am, pitting Eugene Katchalov against Nikolaus Jedlicka. It was decided that play would be suspended since both were registered to play in the EPT Vienna Main Event Day 1b. When play was stopped, Jedlicka enjoyed a modest lead of 5.03 million in chips against Katchalov’s 4.08 million. At that time, a monetary deal was made that awarded Jedlicka €127,600 ($175,462 USD) and Katchalov €121,700 ($163,349 USD). Remaining for both players was the title and €27,700 ($38,090 USD).

Both players were eliminated from the Vienna Main Event before the end of Day 2 of that tournament, so the High Roller event resumed at 9pm. When play started back up, the two battled for four hours to determine a winner.

After his win, Katchalov posted on Facebook, “There is always the feeling of incredible accomplishment to be the last one standing among so many good players in the field. Four hour super tough battle where I was down most of the time but pulled through in the end. Thanks to everyone for the support!”

Eugene Katchalov is no stranger to success at the poker tables. His biggest win was the aforementioned WPT Doyle Brunson Five Diamond Classic. His next biggest win was the PCA $100,000 Super High Roller event back in June 2011, which fetched a whopping $1.5 million. That same year he nearly won a half-million at the EPT Barcelona Main Event, where he took third place for $453,812. Previously this year, Katchalov won over a half-million by finishing in second place at the EPT Deauville Main Event for $518,981. According to multiple industry databases, Katchalov has over $8.26 million in live tournament earnings, making him the number one all-time Ukrainian money earner in poker.