“Kanu7” wins Player of the Year at British Poker Awards 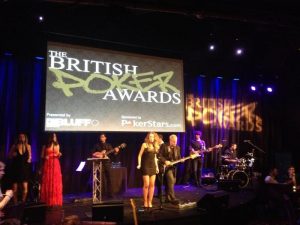 Just 12 hours after the Oscars had wrapped up across pond, the UK’s “pokerati” descended upon London’s Hippodrome Casino  on Monday night for their very own awards ceremony, designed to honor the best in UK poker. Organized and presented by Bluff editors Michael Caselli and Eve Goodman – and sponsored by PokerStars – the evening was the culmination of a several month-long voting process, complete with showgirls and champagne. Players such as Sam Trickett, Barny Boatman, Neil Channing and Victoria Coren were in attendance, rubbing shoulders with industry types and the ticket-buying public.

“There isn’t really any other event that brings players, industry and the public into one room to celebrate the achievements of poker,” said host and Bluff Europe Magazine editor-in-chief Michael Caselli.

In fact, the public had been heavily involved in this democracy of an awards ceremony from the get-go: while nominees had been chosen by a cross-section of the poker media – representatives from Bluff Europe, PokerNews.com, PokerStrategy.com, as well as “The Voice of Poker” himself, Jesse May – many of the actual winners had been determined by online public vote. Among the players the UK public chose to honor was veteran “Hendon Mobster” Barny Boatman, who picked up “Performance of the Year” for winning his first-ever WSOP bracelet in Vegas, as well as the special “Lifetime Achievement Award”, and the versatile Sam Trickett – multiple winner for the second year running – who this year won the Best Tournament Player and Best Cash Game Player. Other notable winners were Chris Moorman (Best Online Tournament Player), Sam Grafton (Poker Personality of the Year), Victoria Coren (Best Social Media User), Tony Kendall (Best Contribution to Growing and Promoting Poker) and Neil Channing (Best Blogger). Toby Stone of the EPT and UKIPT took home the “Best Tournament Director Award”, Dusk Till Dawn nabbed “Best Card Room”, while Daniel Negreanu won “Best International Player”.

British Player of the Year Honored

The most prestigious title, however – “British Player of The Year” – was reserved for Alex “Kanu7” Millar. He may not be a household name yet, and he barely plays live tournaments, which means he doesn’t get his face on TV, but Millar, has been tearing up the virtual felt at the highest stakes for some time now and is considered by many to be one of the best heads-up NLH players in the world. His massive results and six-figure winning sessions also caught the notice of PokerStars.com, who signed him up as the latest addition to the “Team Online” roster of pros. Millar also picked up the “Best Online Cash Player” award.