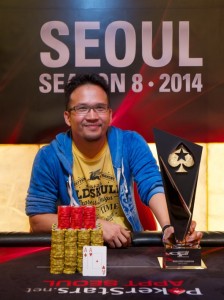 For most poker players – even those that are at the top of their profession – making a final table and getting heads-up for a championship is a once-in-a-lifetime event. Rarely does a player get the opportunity to come back and get the chance for redemption in the very event where he or she loses heads-up.

Just one year ago, Chane Kampanatsanyakorn came up short at the Asian Pacific Poker Tour (APPT) Seoul Main Event. This year, Kampanatsanyakorn was able to redeem himself, as he took down this year’s Season 8 APPT Seoul Championship.

Played this past weekend at the prestigious Paradise Walkerhill Casino poker room in Seoul, South Korea, the APPT Seoul Main Event promised a solid turnout. With Day 1a bringing 118 players and Day 1b offering 138, the total field for the event ended up being 256 players. The event cost ₩3 million to enter, which translates to approximately $2,850 USD. Given the player pool, the overall prize pool size was ₩685,363,200 ($649,724 USD). The top 28 grinders would end up cashing in the event.

At the end of Day 1b, the day’s 138 runners were shrunk down to just 47, with two players from this day accounting for the biggest two chip stacks heading into Day 2. It was Hong Kong pro Raiden Kan who held the chip lead with 156,400 in chips, with United States player Timothy Palace in a close second with 155,400 chips. Day 1a chip leader Masato Yokosawa with 146,800 chips was in third place.

While the original plan for Day 2 for tournament organizers was to play eight hour-long levels to see who the top 28 players would be, the field ended up a bit smaller than planned. The defending champion, Aaron Lim, was eliminated early on Day 2, as was Day 1a chip leader Masato Yokosawa. PokerStars Team Online’s Naoya Kihara, as well as Sam Razavi and APPT POY candidate Hao Chen, were also taken out before Day 3. Sid Kim ended up being the Bubble Boy by being ousted in 29th place, and in the next 30 minutes after that happened, four more players were eliminated.

Day 3 Sees Kampanatsanyakorn Take It Down

Day 3 – played last Sunday – started with 24 players and played down to a winner. Jeffrey Holbrook entered the day as chip leader, but ended up being eliminated in 10th place. Once play whittled down to three players, a deal was struck after a ten minute conversation. The deal broke down as the following:

After the accord was struck, there was still ₩30 million ($28,500 USD) to be played for, including a prize package to the ACOP Main Event in November for the winner. Cohen, shortly after the deal was struck, was eliminated in third place.

In a press release sent by PokerStars, Kampanatsanyakorn was quoted as saying, “I’m so grateful… I never gave up,” when asked to recall his journey from last year’s heartbreak to this year’s triumph.