The latest Unibet Open Main Event wrapped up in Copenhagen this past weekend. The tournament drew 404 runners and saw 38-year-old Estonian Kaarel Lepik take down a DKK 562,300 ($84,980) first-place prize after coming back from a nearly 12:1 chip deficit. 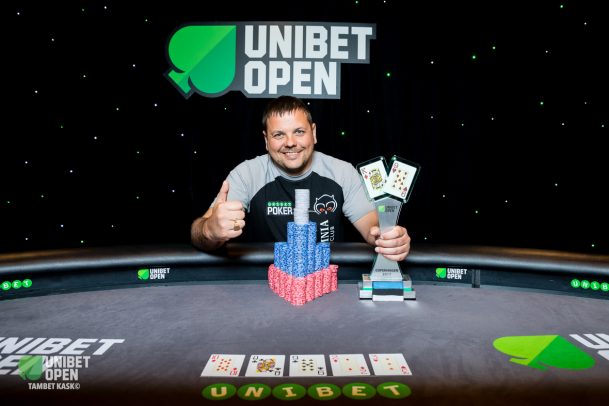 Kaarel Lepik traveled from Estonia’s first poker club all the way to Copenhagen to win the Unibet Open for $84,980. (Image: Unibet Open)

There were several interesting storylines at the final table, including start-of-the-day chip leader Monica Vaka, who was hoping to become the first woman to ever win a Unibet Open Main Event. Meanwhile, Peter Harkes was gunning for a two-time champ victory after winning the 2011 Unibet Open Riga.

Straight to the Top

It began when Lepik raised to 320,000 with the A♠5♠ and then called when Carlsson three-bet with what turned out to be the 9♠7♠. When the flop came down 7♦4♣3♦, both players checked and the 2♣ appeared on the turn. Carlsson checked, Lepik bet 800,000 with the wheel, and Carlsson called.

When the 7♥ completed the board on the river, Carlsson checked his trips but called when Lepik moved all in for 4.5 million. With that, Carlsson was left with just 650,000 and went broke in the very next hand.

Lepik was one of six players who traveled to Copenhagen from the Insomnia Poker Club, Estonia’s first such club.

“[He is] definitely the best player in the 45-man club, mainly because he is very mathematical,” the outfit’s manager told Unibet officials of Lepik. The Estonian took home DKK 562,300 ($84,980) for the win, which was on par with what Gerret Van Lancker won in February’s Unibet Open London.

Unibet, a site that has been on the rise, will hold its next Main Event in September, with the location TBD. The final stop of the year will then take place in Bucharest from November 29 through December 3, which will also mark the 10th anniversary of the Unibet Open.