Schools were off for Columbus Day on Monday, and one teacher made particularly good use of the holiday as the World Series of Poker Circuit wrapped its latest stop at the Horseshoe Southern Indiana. The $1,675 Main Event drew 424 entries, and after three days of play 30-year-old Ohio PE and health education teacher Justin Boggs emerged victorious to win $139,920, his first ring, and a seat into the season-ending 2018 Global Casino Championship. 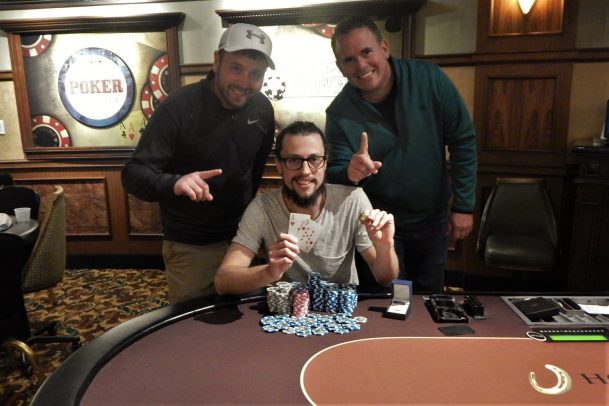 Chip Leading All the Way

Boggs began Day 2 with the overall chip lead, but he got off to a rocky start upon his return.

“Well, it’s different when you have to play like a really large stack compared to everybody else,” Boggs told WSOP officials. “Honestly, started the day 0-4 in races against short stacks. I pedaled back down to like 350,000.”

Impressively, Boggs rebounded and also finished Day 2 as the big stack. However, the other eight players joining him at the final table were tough including WSOP bracelet winner Scott Montgomery and two-time ring winner Chris Carey. However, the title eventually came down to Boggs and one-time ring winner Wendy Freedman, who you might recall made a deep run in the 2016 WSOP Main Event.

“Wendy and I went back and forth,” he said. “There was a huge hand on Day 2. It was just a sicko hand. From that point on, I really just kind of told myself ‘this is going to be a heads-up battle between us.’ I don’t know why, it just kind of seemed like that.”

Boggs began the heads-up match with a big chip lead, and in the final hand of the tournament, which occurred in Level 31 (50k/100k/10k), Boggs shoved the button holding A♣9♣, and Freedman called off for more than 1.2 million with an inferior A♠2♠. Freedman was looking for some help, but none came as the board ran out K♦Q♥4♥3♥10♠.

Aside from the Main Event, there were 11 other gold ring tournaments at the WSOP Circuit Horseshoe Southern Indiana, and two of them were won by familiar faces. In Event #12, $365 NLHE, Illinois poker pro Ryan Leng bested a field of 121 players to win $10,164 and his first circuit ring. It also boosted his total WSOP career earnings up over $700k.

From 2009-2013, the Georgetown, Kentucky, resident held the record for most WSOP Circuit gold rings in history. However, several players have surpassed him in recent years, including Maurice Hawkins, who now leads with ten rings.

The WSOP Circuit continues this weekend through October 23 at Horseshoe Hammond, which is in the northern part of Indiana, just east of Chicago.