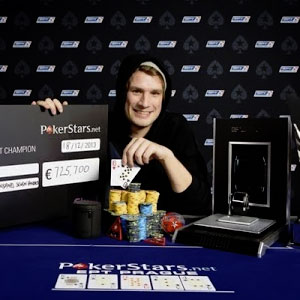 The European Poker Tour was in the midst of its tenth season when it headed to Prague, Czech Republic. The last stop of 2013 was at the Golden Prague Poker Room in the Hilton Hotel where a partnership with the Eureka Poker Tour provided more than 40 tournament options for players. The festival began with the Eureka Poker Tour Main Event and High Roller tournaments. Bigger events followed for the enjoyment of players and poker fans alike.

The EPT €5,300 No Limit Hold’em Main Event was an exciting showing that resulted in a new Prague record being made and a PokerStars qualifier named Julian Track winning more than €725K. Play began with two starting days and a total of 1,007 players from a total of 60 countries and territories. That number made it the largest tournament in EPT Prague history and created a prize pool of €4,883,950, enough to pay the top 151 players.

Action heated up on Day 3 as it started with 189 players but quickly burst through the money bubble. Names like Sylvain Loosli, Dominik Nitsche, Bertrand Grospellier, Amir Lehavot and Jonathan Duhamel cashed before the night ended. Day 4 brought back 61 players and saw the eliminations of participants like Ana Marquez and Ludovic Lacay before finishing with 22 players. It should be noted that Julian Track was second in chips after Day 3 and the chip leader at the end of Day 4.

Day 5 saw the departures of European Poker Tour champion Dimitri Hodeew in 15th place, Andrew Chen in 13th and Sigurd Eskeland on the final table bubble in ninth place, which was worth €66,050. The final table was then set for December 18 with Julian Track as the chip leader holding 7.24 million chips, Max Silver in second with 5,935,000, Stephen Chidwick in third and Ole Schemion toward the lower end of the chip counts.

The double-ups were frequent at the final table, as short-stacked Jorma Nuutinen did it through Silver but then busted to Track in eighth place. Play moved forward with Silver out in sixth, Schemion in fifth and Chidwick in third. Track took a slight lead into heads-up play and he made a deal with Sotiropoulos to chop the prize money at €700K each and play on for the title, trophy and $25,700. Sotiropoulos did not give up easily and doubled several times but never gained enough traction to capture the lead. He eventually pushed with Q-J but ran into the pocket tens of Track and lost. With that, Julian Track became the latest EPT champion.

The much-anticipated €10K buy-in NLHE High Roller event was among the other tournaments at EPT Prague. By the start of Day 2, there were 137 players and 39 reentries to catapult the tournament well beyond the previous year’s field. The 176 entries created a €1,724,800 prize pool, out of which the top 27 players were paid.

The final table moved along with Oliksii Khoroshenin out in tenth place and Jeffrey Rossiter in ninth. Max Heinzelmann was next to hit the rail, followed by Vanessa Selbst, Andy Seth and Mike McDonald. Yurasov took his leave in third place while Ivan Soshnikov took a significant lead into heads-up play over Busquet. The match was quick, and Soshnikov eliminated Busquet to capture the title and more than €382K in prize money.

There were quite a few players who competed in the side events in Prague, and it was no surprise that Vanessa Selbst took down one of the first. She took part in the €5,300 EPT PLO Championship tournament, emerging victorious from the field of 71 players to take home €100,700.

Only one player took down two events at the series. Rinat Shakirov collected the trophies for the €220 Pot Limit 7-Card Stud Deepstack and €220 PLO Hi/Lo Deepstack Turbo events.