Josh Adkins made a prediction – he was going to win the $5,000 buy-in WPT Bestbet Bounty Scramble in Jacksonville. Then he went out and did it, pocketing a tidy $331,480 despite having minimal live tournament experience. Perhaps, he could hook us up with the upcoming Powerball numbers. 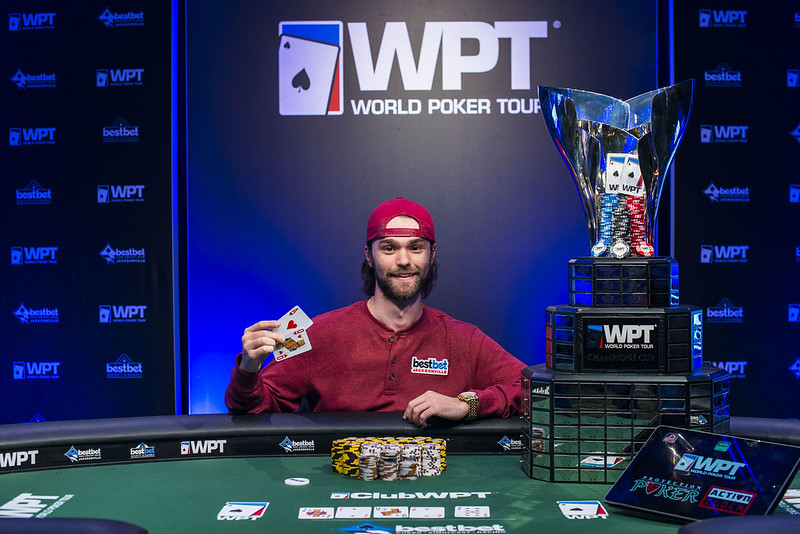 Josh Adkins is a talented poker player with the ability to see the future. (Image: wpt.com)

On top of the six-figure payday and $15,000 entry into the May World Poker Tour Tournament of Champions, the champ collected a pair of $2,500 bounties when he busted Jake Schwartz and Nabil Hirezi. Not too shabby for a cash game specialist.

Like Babe Ruth in the 1932 World Series (of baseball), Adkins called his shot entering the WPT Bestbet Bounty Scramble. The Florida native, who only had to travel two hours to play in the event, sent his friends a text message predicting he would win the tournament before it started on Oct. 11. Then, a few days later, he made good on that prediction.

Adkins had never previously entered a tournament with a buy-in even close to $5,000. His specialty is cash game poker, and he had only $22,000 in previous live tournament winnings. So, the odds certainly weren’t in his favor in this 349-player tournament featuring some talented tournament grinders, such as Jake Schwartz and Joe McKeehen.

Adkins, however, showed he can compete with the best of them. After Day 2, he bagged the biggest stack. He continued his impressive play on Day 3, and was just short of the chip lead heading into the final table.

It took a bit of luck for Adkins to win, however. On the final hand of heads-up play against Tan Nguyen, he got it in bad with A-Q against A-K. Fortunately for the soon-to-be champ, the board ran out J-2-Q-2-9, and the tournament came to a conclusion.

Nguyen took home $210,988 for second place. Josh Kay, who began the day with the chip lead, busted in third place for $155,340. Jason Lee was the fourth-place finisher and earned $115,340. Jonathan Cronin, who was attempting to become just the second player to win both a WPTDeepStacks and WPT Main Tour event, went out in fifth place ($87,170). Jeff Cunningham was first to go home on Tuesday, finishing in sixth place for $66,457.

What’s Up Next for World Poker Tour?

With the Bestbet Bounty Scramble in Florida reaching its conclusion, the World Poker Tour will soon head north to Canada – more specifically, Montreal – for the WPT Montreal, a CAD $3,300 event beginning Oct. 29 at the famous Playground Poker Club.

After that, the Main Tour takes a month off before going back down to Florida for the $3,500 Seminole Hard Rock ‘N Roll Poker Open in Hollywood on Nov. 29.