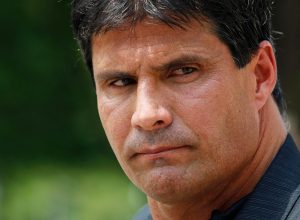 The November Nine: Former MLB star Jose Canseco loses his finger in a game of poker, to no one’s delight but his own. (nbcnews.com)

For Jose Canseco, it was probably as bad a hand as he’s ever had at a poker table this week, considering it cost him a finger.

No, he didn’t renege on a mob loan; Canseco had reportedly blown the offending digit off last month when his handgun accidentally discharged as he was cleaning it at his home in Las Vegas. Doctors stitched the finger back on, but evidently not very well.

In fact, the baseball legend’s middle finger apparently fell off right in the middle of the game, causing, needless to say, some consternation among his fellow players.

“OK, well, I might as well tell you. I was playing in a poker tournament last night and my finger fell off,” explained Canseco to the Twittersphere. “Someone took a video of it,” he added, helpfully. And who wouldn’t want to see that?

Canseco had been upset in interviews following the initial loss of his finger, perhaps because the bullet only narrowly missed his girlfriend, swimwear model Leila Knight, who was standing nearby. In an emotional interview with Inside Out, Canseco broke down as he recounted the incident.

“At first I heard it go off and I actually grabbed the gun and put it on the table,” he said. “I thought nothing had happened. Then I look at my hand and my finger’s blown off.”

“I was telling Jose not to look at his hand because he kept saying that he felt nauseous and said he was going to pass out,” said Knight in a separate interview. “The middle finger was hanging by a thread, and I wrapped his hand in a towel and then called 911.”

“I’m just glad nothing happened to her,” Canseco said. “If it’s a lesson having to lose a finger, so be it.”

A somber lesson, indeed, except that when his finger fell off for the second time, the Cuban-American former MLB star appeared to find it hilarious. “This guy called my agent and sold him the video of my finger falling off. It looks kinda funny. lol,” he Tweeted.

And then: “I put my finger in the freezer anyone want finger appetizers?”

The right-handed batter hit 462 home runs during a career that spanned 1985 to 2001, but caused controversy when he admitted to taking performance-enhancing drugs in his autobiography, “Juiced: Wild Times, Rampant ‘Roids, Smash Hits & How Baseball Got Big”. He was a six-time All-Star, playing for Texas, Boston, Toronto, Tampa Bay, the New York Yankees and Chicago White Sox. This week he speculated that he might be able to hit a softball further with nine fingers because “less weight means more bat speed.”

“My finger should have been amputated from the beginning,” he complained earlier. “It was very loose with no bone to connect it. It was also smelling really bad.”

Photographs and video of Canseco’s ex-finger exist online; however, we suggest you do not seek them out as they’re completely gross.

This is why you shouldn’t be having beers while you clean your gun. I don’t get how so many people manage to shoot themselves, it’s ridiculous.

Some players will simply give you the finger when they lose. I’ll just assume Jose had more than one bad hand in this tournament. Cue the jokes about finger foods… rim shot…