Former WPT TOC champ Jordan Cristos is none too thrilled with the recent Tournaments of Champions’ adoption of a shot clock, and his ire over the matter caused a major poker spat in the Twittersphere this week. 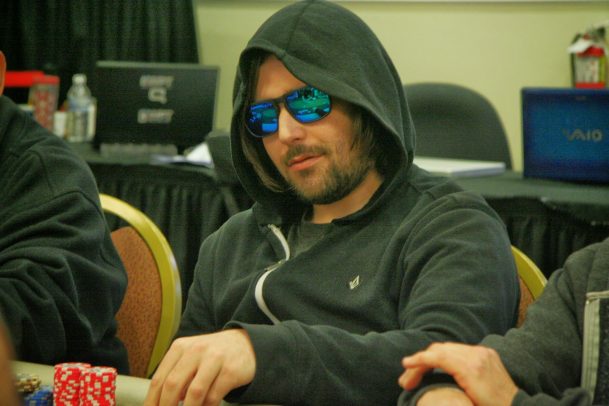 “I’m thinking”: Jordan Cristos has threatened to deliberately prolong the WPT TOC next week by using the new shot clock on every single hand he plays. (Image: the bicyclecasino.blogspot.com)

In one corner, Cristos, a noted fan of long and drawn out poker play, believes that interminable dwelling on one’s hand and subsequent actions is an inalienable right. In the other corner is pretty much everybody else, all of whom are really bored of this sort of behavior.

Under the new WPT TOC rules, each player will receive 30 seconds to act, pre-flop, post-flop, and on each subsequent street. Dealers, who will control the clock, will advise when a player has 10 seconds remaining, after which their hand will be declared dead if they have not acted.

Each player, however, will receive four “extension chips,” which will allow them to call for 30 more seconds should they need it.

Next week’s TOC will mark the first time in WPT’s 14-year history that a time-bank concept has been employed to speed up the action, although WPT tournament director Matt Savage has said he’s been considering it for some time. Savage conducted a poll of players at the 2014 WPT LA Poker Classic Main Event to gauge the level of support for such a concept, and a resounding 80 percent voted in favor of implementing it.

Daniel Negreanu has been a vocal proponent of the concept, too, not least while commentating at last year’s WSOP final table. That’s where tanking by certain players, especially pre-flop, was in danger of spoiling the drama of poker’s biggest annual spectacle entirely.

But Cristos is furious.

“Just found out the TOC has a 30-second action clock with 5 extensions [actually, Jordan, it’s four]. Word on the street is @RealKidPoker &@MikeSexton_WPT had to do w (sic) it,” he tweeted testily, and then: “sometimes takes 20-30 seconds to get a good count on opponents stack before making decisions. So disrespectful,” Cristos complained.

He then declared that for the entire TOC next week, he will purposefully be stalling to the 30-second mark, just to annoy people. It will be “worse than before,” he warned.

“To all who believe they have right to take all the time they want, what about the rights of others to get out more hands ea[ch] level?” asked longtime WPT commentator Mike Sexton in response.

“I have a solution for you!” Negreanu chimed in. “If you don’t want the extra $100k added to this format, then you can choose to skip it!”

Negreanu then took to his blog to continue the argument. “If everyone acted the way Jordan Cristos does in tournament poker, it would cease to exist,” he said. “Not only would it destroy the structures where you get only 10-15 hands an hour, it makes the game boring for amateurs, which also eats into a pros [sic] profits.

“This is a choice. Jordan talks a lot about respecting the game and respecting the players, but his actions show absolutely no respect for other players’ time or what is best for the game or the community,” Kid Poker added.

All eyes will be on Cristos, if he chooses to play next week, and in particular how long the arch-staller ponders over each decision.

I’m in favor of adding some sort of a “shot clock”. However this particular setup seems a little short for a major tournament.

I am in favour of some form of control for players tanking for long periods unless its a All – In scenario.
In this article and my understanding of both positions, I personally think WPT and Jordan both got it wrong.

Seems both sides are using their own agendas. One takes too long & the too short of time.
The solution to this would be to give each player his own allotted time bank to use as he wishes with limited use of the time for each round of betting , unless its for a certain amount of his chips or All- In scenario. This allotted time bank would be for the use of the whole tournament. This will restrain players from tanking or stalling, whatever you wanna label it. May also may stop certain players from abusing time. Just a thought. 🙂