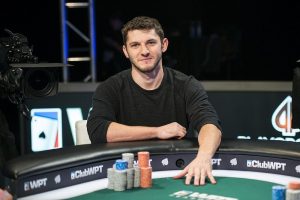 Bested a Field of Over 700 Players

A mere nine hands into final table play, there was a pivotal all-in hand. Mukul Pahuja was able to double up on Guillaume Nolet, which left Nolet with only a microscopic amount of tournament chips. The very next hand, Nolet was all in with 9-4 off, which was in pretty bad shape to Jaffe’s pocket aces. Nolet was promptly eliminated in sixth place, which earned him CAD $90,350 (approximately $79,680 USD).

Samuel Chatier was the next player eliminated, which happened when he went all-in for about 2.5 million with pocket sevens. Ratharam Sivagnanam, who had him covered, called with pocket queens, which held up, sending Chatier to the rail in fifth place. For his time, he picked up CAD $111,820 (about $98,615 USD).

It wasn’t too long before the next elimination occurred. Preflop, Kevan MacPhee risked it all with K-T offsuit on the small blind. He was called by Jaffe, who held A-Q suited. The flop was A-Q-8 which was all good for Jaffe, but gave MacPhee four outs to a straight. The turn ended the hand, however, with another ace, giving Jaffe the winning full house and eliminating MacPhee in fourth place for a CAD $149,340 ($131,700 USD) payday.

From there, the game slowed down slightly, but it didn’t take too long before the game was heads up. While three-handed, Pahuja went all-in preflop with A-Q offsuit. Jaffe, once again, woke up with a killer hand, this time in the form of pocket cowboys. Much like his previous hand, Jaffe hit the board hard spiking a set on the flop, which was good enough to hold up and eliminate Pahuja in third place. For his efforts, he took home CAD $201,920 ($178,075 USD) which is only the third-highest amount won this year. The noted poker pro previously won $691,965 at the No Limit Hold’em Championship at the WPT Seminole Hard Rock Showdown, and also $320,800 at the WPT Bay 101 Shooting Stars event. His total live career earnings amount to approximately $3.2 million after this event.

Starting heads-up play saw Jaffe with a sizable lead in chips to the tune of 16 million versus the 5.9 million held by Sivagnanam. In a huge back-and-forth struggle that ended up taking longer heads-up than all previous final table hands did combined, not a single all-in pot occurred until the fateful final hand of the tournament.

On the 135th hand of final table play, Sivagnanam limped in and Jaffe raised. Sivagnanam thought about his situation and then shoved in for 5.22 million. Jaffe insta-called with A-K suited (clubs), which was well ahead of Sivagnanam’s T-8 suited (diamonds). The board eventually ran out 6h-4s-3s-Jh-Qh which eliminated Sivagnanam in second place for CAD $313,318 ($276,318 USD). Jaffe took home the first place prize and CAD $463,432 ($408,706 USD) with the win.