On Day 1B of the 2018 WSOP Main Event, it was a crazy game of poker, but O.A.R. was nowhere to be found. The always colorfully dressed John Hesp made his triumphant return to poker’s grand stage, former November Niner Max Steinberg was eliminated on the very first hand, and Jason Mercier let his stack blind off for over an hour while he played high stakes cash games down the road in Bobby’s Room at Bellagio. 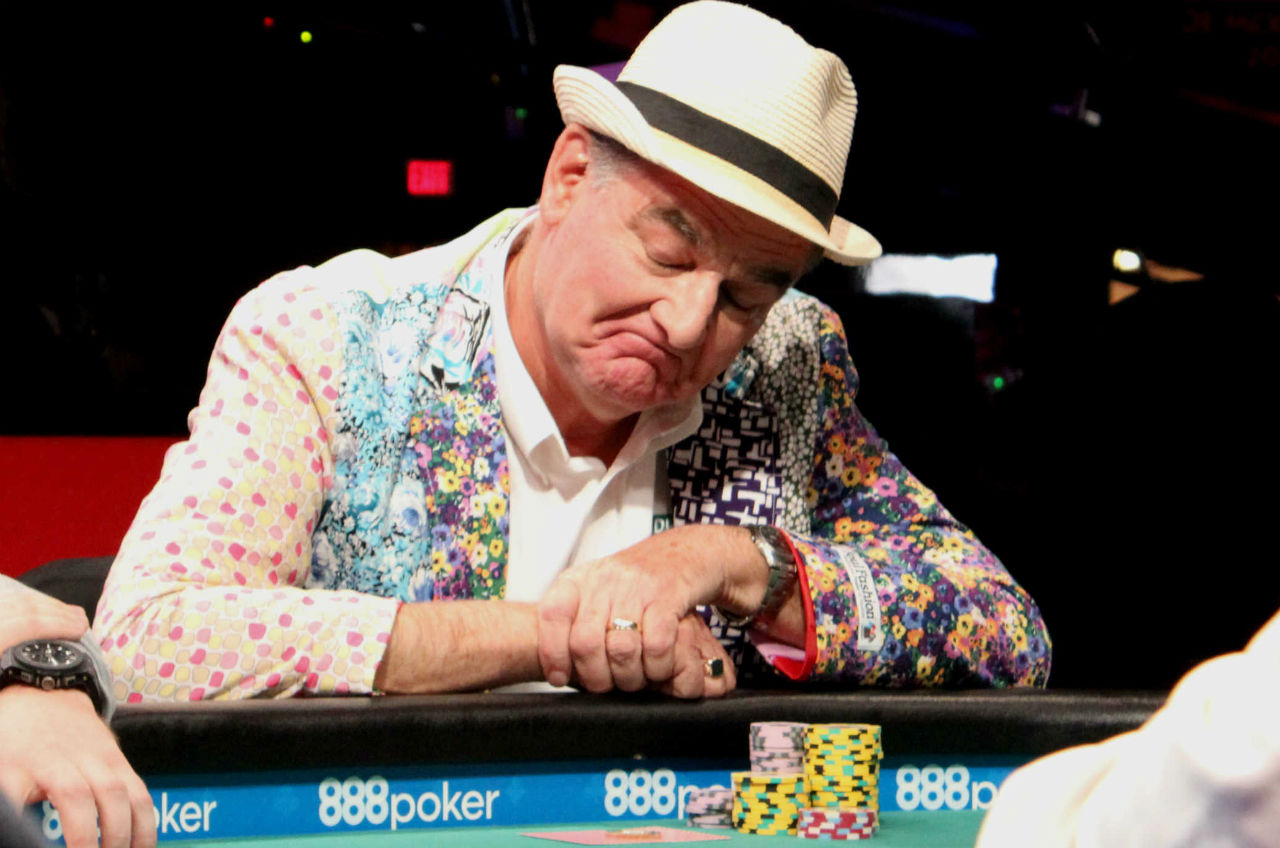 John Hesp — seen here at the 2017 WSOP Main Event, either thinking or napping — made a triumphant return to the Rio on Tuesday, and in the same jacket, no less. (Image: playusa.com)

Hesp was back at the Rio competing in the 2018 WSOP Main Event on Tuesday, wearing the same patchwork jacket that brought him luck in 2017, when he finished fourth for $2.6 million. (Image: reformer.com)

Day 1B had 2,378 entries, bringing the event total to 3,303 players after two sessions, which is 414 more than in 2017.  But with Day 1C occurring on the Fourth of July, it’s possible the final session will have a smaller field than normal.

John Hesp was an unknown in the poker world prior to last year’s Main Event. By the time the tournament reached the final table, he had carved out a new niche as delightful personality. On Tuesday, he returned to the Rio, albeit a bit subdued for a guy who was so talkative at the final table last year.

Hesp — who was seated on one of the two outer featured tables during ESPN’s broadcast — took pictures, shook hands, and smiled for fans prior to the start of play. He then picked up where he left off last year, bagging a respectable stack (63,900) and moving on to the next day.

Doug Polk finally made an appearance at the 2018 WSOP on Tuesday, but only lasted a few levels before being eliminated.

It was an expensive summer for the YouTube personality who also made a quick exit from the $300,000 Super High Roller Bowl in late May and poured some bankroll into a billboard that read “MoreRakeIsBetter.com,” to mock foe Daniel Negreanu.

Max Steinberg, who took fourth in the Main back in 2015, paid $10,000 for two minutes of fun, if that’s what you want to call it. On the very first hand of the tournament, he picked up pocket aces and got his entire 50,000-chip stack in against Michael Rack’s pocket kings.

Well this is a first. AA first hand of the main. Get it all in vs KK. K in the window. Two players said they folded other aces. GG!

It was the second straight day a player was eliminated on Day One of the Main Event, and both times the winning player held pocket kings. Victor Ramdin turned a set of kings on Monday against an overly aggressive unknown player who attempted a failed semi-bluff for his entire stack.

*Memo to Day 1C players: If you put your opponent on pocket kings on the first hand, just fold.

Where Did He Go?

After the dinner break, Hesp’s table was moved to another spot in the Amazon room in favor of the Jason Mercier’s, kind of.

The correct way to state it is Mercier’s stack made an appearance at the feature table, while Jason was M.I.A., leading some to speculate he had daddy duties to take care of. Those rumors turned out to be false after his wife, Natasha, posted a picture on Twitter explaining the situation.

Mercier was busy competing in high stakes cash games at Bellagio while getting blinded off at the Rio. Fortunately for the 2016 WSOP Player of the Year, the blinds and antes are small on Day One.

He must have known what he was doing. By the time he eventually returned to his tournament seat, he’d ended the session with 62,600 chips and will be in a good position on Day Two (blinds start at 300-600).

You can’t win the tournament on Day One, or Day Two either, for that matter. All you can do on the 13-day tournament’s first session is hold onto your seat for the next day, which many of the game’s best players accomplished, including a pair of poker couples – Kristen Bicknell/Alex Foxen and Phil and Farah Galfond.

Day 1C, the final Day One session, kicks off at 11 am PT on Wednesday. Phil Hellmuth, Chris Moneymaker, and Daniel Negreanu will be among the players. You can catch the action on a 30-minute delay on ESPN2 from 5:30-9 pm PT.

its good to have some color back in the main event

Typo:
“It was the second straight day a player was eliminated on Day One of the Main Event, and both times the winning player held pocket kings.”

I’m pretty sure that’s happened on every Day 1 of the ME – even when it was a seven player tourney!