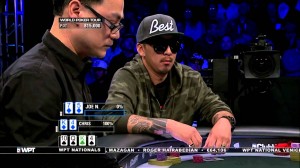 Another eventful stop for the Heartland Poker Tour’s tenth season has wrapped up and declared another winner. Telephone repairman Joe Nguyen of San Jose, California rose through the ranks at the Club One Casino in Fresno, California to claim his HPT championship. The latest nationally televised event featured plenty of memorable moments for what should be a very exciting season of poker.

Fight for the Final Table

Competition for the $315,645 prize pool resulted in a Final Table that consisted mostly of local players. Nguyen’s final opponent was Club One Casino’s Director of Business Development, Su Kim. Playing on her home turf, Kim beat back four all-in situations in the Final Table—three of those times she caught a card on the river. With a four- to-one chip lead on Kim, Nguyen solidified the championship win with just two hands. Kim took home $46,715, while Nguyen claimed $74,754.

Kim was definitely fierce competition throughout the players’ stay at her hotel. She sent Prabhakar Thonduru home after he started with the shortest stack at the Final Table. Though he managed to get an early double, Thonduru’s second double up with a king-jack was beaten down by Kim’s pocket eights. Thonduru took ninth place for $8,207.

Club One Casino’s card room attracted a large crowd where attendants were standing in anticipation all the way up until the final hand. Club one has also gained recognition as an HPT fan favorite because of their player perks, dining options and friendly staff. Money clips from Tiffany & Co. and other gifts were also awarded to top-finishing players.

“Club One Casino has been a great host,” said fourth place winner Dan Evans of Chino, California. “Food is good and service is great.”

Frequent viewers of HPT will likely recognize a few familiar faces from past broadcasts when the Club One episodes air in the spring. Stan Jablonski returned for a fourth time and hoped for a first win. Victory seemed inevitable as Jablonski was the chip leader going into Day 2 and for much of the day. But Nguyen dashed those championship dreams when his ace-nine bested Jablonski’s ace-four, taking him to sixth place for $14,204. William Chao was another HPT veteran who came up short to Nguyen. Chao moved all-in with an ace-ten against Nguyen’s ace-king, coming to a halt in fifth and collecting $17,360.

“I’m very fortunate to play three HPT events and make it deep in all three. I was so close so many times,” noted Chao.

Triet Nguyen returned to Club One seeking redemption after he was the runner-up at HPT’s last visit in Fresno. His all-in move with ace-eight was not enough against Jed Hoffman’s pocket kings. Triet Nguyen collected $11,837 with his seventh place finish while Hoffman lasted until third with $31,565.

Action for the Heartland Poker Tour keeps going, with many stops to look forward to as the season continues. Colorado’s Golden Gates Casino Resort is currently hosting the tour with Missouri’s River City Casino & Hotel up next on February 20. St. Louis, Palm Springs, Vicksburg, Mississippi and Dayton Beach will take place before the end of March, marking a record year for HPT, with around two dozen planned stops in 2014.

Tanya Kirk, who came in eighth place, said of the tour, “You get a lot of good characters playing the HPT. I think the cameras and the lights are fun.”