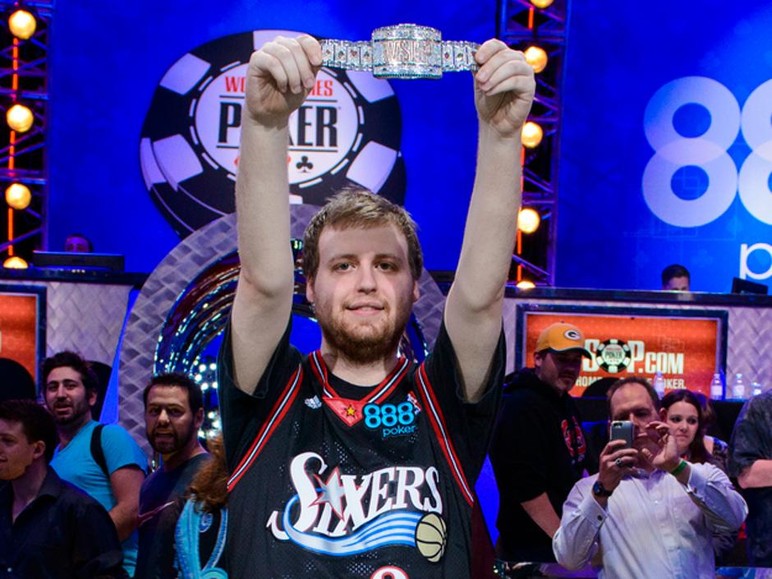 Joe McKeehen, lifting the WSOP Main Event bracelet after steamrolling the table at the Penn & Teller Theater at the Rio in Las Vegas on November 10 to take down the championship bracelet and $7.6 million in cold, hard cash. (Image: WSOP.com)

Joe McKeehen took down poker’s biggest event last night, dominating the November Nine from start to finish, and seeming to hit hands like a teacher with a ruler. But what do we really know about this new $7.6 million man anyway?

The 24-year-old math graduate from North Wales, Pennsylvania steamrolled the final table at the Penn & Teller Theater at the Rio for the entire three-day event, wielding a mighty chip advantage that simply refused to topple.

“Average Joe wins $7.6 million,” blazed the headlines in the mainstream press this morning, picking up on McKeehen’s own self-deprecating label and insistence that he is nothing out of the ordinary.

And, apart from that absurdly large pile of cash he was posing with for the cameras last night, at first glance he certainly fits the bill of the American everyman, or at least the American every-brilliant-poker-player-with-an-everyman aura.

Unkempt hair, perched on top of a pleasant-enough-but-not-super-memorable face, wispy skater beard, T-shirt, hood: he could be any nerdy 20-something from any suburb in America.

Even his online moniker “dude904” can be loosely translated as “just one random guy out of many.”

But wait! Here’s a cool factoid: this is not actually the first time that Joe McKeehen has been a world champion at something. In 2010, he won the world championship of the board game Risk.

Yes, all pretty nerdy, but you’d have to search damned hard to find someone who has been world champion at two different games.

In fact, to save you the trouble, we’ve found one: Bob Hayes held the world record in the 100-yard and 100-meters dash, won two Olympic Gold Medals, and was a four-time All-Pro football player and a member of the world-champion Dallas Cowboys in the sixties.

But apart from Bob and Joe, these types are very, very rare.

McKeehen is no one-hit wonder, either. At last year’s Series, he picked up second place at the WSOP Monster Stack event, for $820,863. In 2013, he won a WSOP Circuit event, and the year before he won a PCA side event for $116,230. And following the conclusion of the WSOP over the summer, he trained for the November Nine event by winning the Wynn Fall Classic. The guy has skills.

McKeehen, though still young, has been around for a while, keeping a low profile, operating under the radar, getting it quietly (as the poker expression goes). Maybe he likes it that way, moving silently through the multitudes, knowing that, ultimately, there can be only one.

Oh wait, that was Highlander.

But the point is, the secret is now out of the bag; there’s no more anonymity and no more hiding. As world champion, McKeehen now assumes the role of “poker’s ambassador,” whether he likes it or not.

And while he doesn’t appear to be dripping with Negreanu-esque charisma, let’s be real: neither are the rest of us. That’s just why, in his apparent “normalness,” McKeehen truly represents poker players everywhere.

So, let’s raise a toast to our new World Champion, Joe McKeehen, who has proven above and beyond that even keeping a low profile, he is way, way above average.

Congrats! He’s 24? … guess he was only 15yrs. old then when he started playing online tournaments