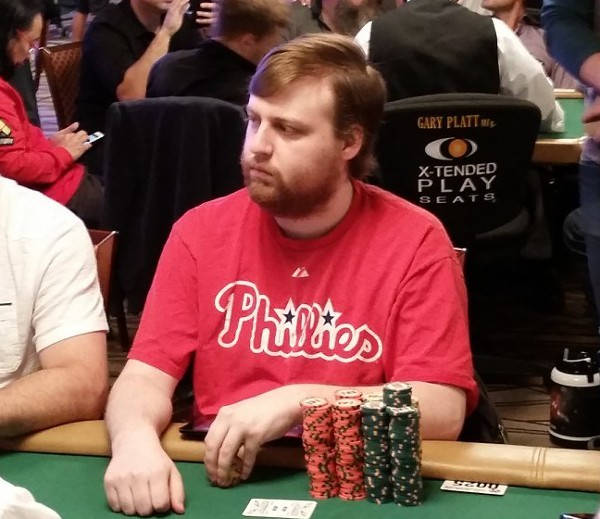 American Joe McKeehen will be the overwhelming chip leader when play resumes at the WSOP Main Event final table November 8th at the Rio in Las Vegas (Image: mahirpoker.com)

Joe McKeehen knows all too well how it feels to be so close and yet so far away. Like golfer Phil Mickelson, who spent years trying to validate his game among the sport’s greats, McKeehen also has something to prove.

Mickelson, for example, had to win a Major. “Lefty” came close many times and racked up numerous victories in lesser events. It wasn’t until the 2004 Master’s where Mickelson shook the “best to never win a Major” label, and became a legend.

When the 2015 WSOP Main Event resumes play November 8, McKeehen will have an opportunity to shake the “great player that hasn’t won a big one” label as well. The 24-year old American enters the final table with 63,100,000 chips, nearly 34,000,000 more than any other competitor.

A massive chip lead guarantees absolutely nothing in poker but, if the Pennsylvania native avoids a collapse, he will claim his first WSOP gold bracelet and join an elite fraternity of Main Event winners.

How He Got Here

McKeehen didn’t get off to a great start in the Main Event. After Day One, he was barely above the starting stack (33,225). However, this tournament isn’t won on Day One. Survive and advance. Day Two was a bit kinder to Joe.

The poker pro increased his stack to over 160,000 chips, which was good for 336th place. By the time the bubble had burst on Day Three, McKeehen was stacking chips like stacking chips was going out of style.

He finished Day Three with 1,052,000 (2nd overall). Day Four was another great session for the man known as “dude904” online. He finished as the chip leader at 3,122,000. With just three more grueling days of play remaining before the November Nine, McKeehen was poised to use that big stack to his advantage.

Still with a big stack and confidence to go with it, Joe picked it up a notch on Day Six, getting back into the top 5 overall (11,975,000). With just one more session prior to the 4-month break, McKeehen was in a great position to make the prestigious November Nine.

By middle of the evening, McKeehen had his sights set on the gold bracelet, not just getting to the final table. Late in the session, McKeehen made headlines for busting the legendary Daniel Negreanu in 11th place, winning via a sick suck out on the river.

Joe McKeehen doesn’t have to prove to the poker world he’s got game. He needs to prove he’s good enough to win major tournaments such as the WSOP Main Event. McKeehen already has wins in mid-level events such as a 2012 PCA and a heads-up WPT Borgata title in 2014.

Now it’s time for him to show the poker world he can close in the game’s biggest event, just like Phil Mickelson proved to golf fans in 2004 he’s more than “the best to never win a Major”. The pressure is on McKeehen more than anyone else at the final table.

He’s the chip leader and the most accomplished player at this table. A win proves he’s an upper echelon poker player. A loss means McKeehen is just another November Niner, not that 99.99 percent of all poker players wouldn’t die to acquire that label.

Editor’s Note: This profile of a WSOP 2015 November Niner is one in a series we are doing leading up to the start of the three-day event on ESPN. Be sure to check out our other player profiles, and follow us as we cover the exciting play, beginning Nov. 8th.