Joe Cada just had one of the most impressive weeks in poker history. After busting out of the WSOP Main Event in 5th place on Friday, he registered for the $1,500 The Closer event the following day and, on Sunday, shipped the bracelet for $612,886. 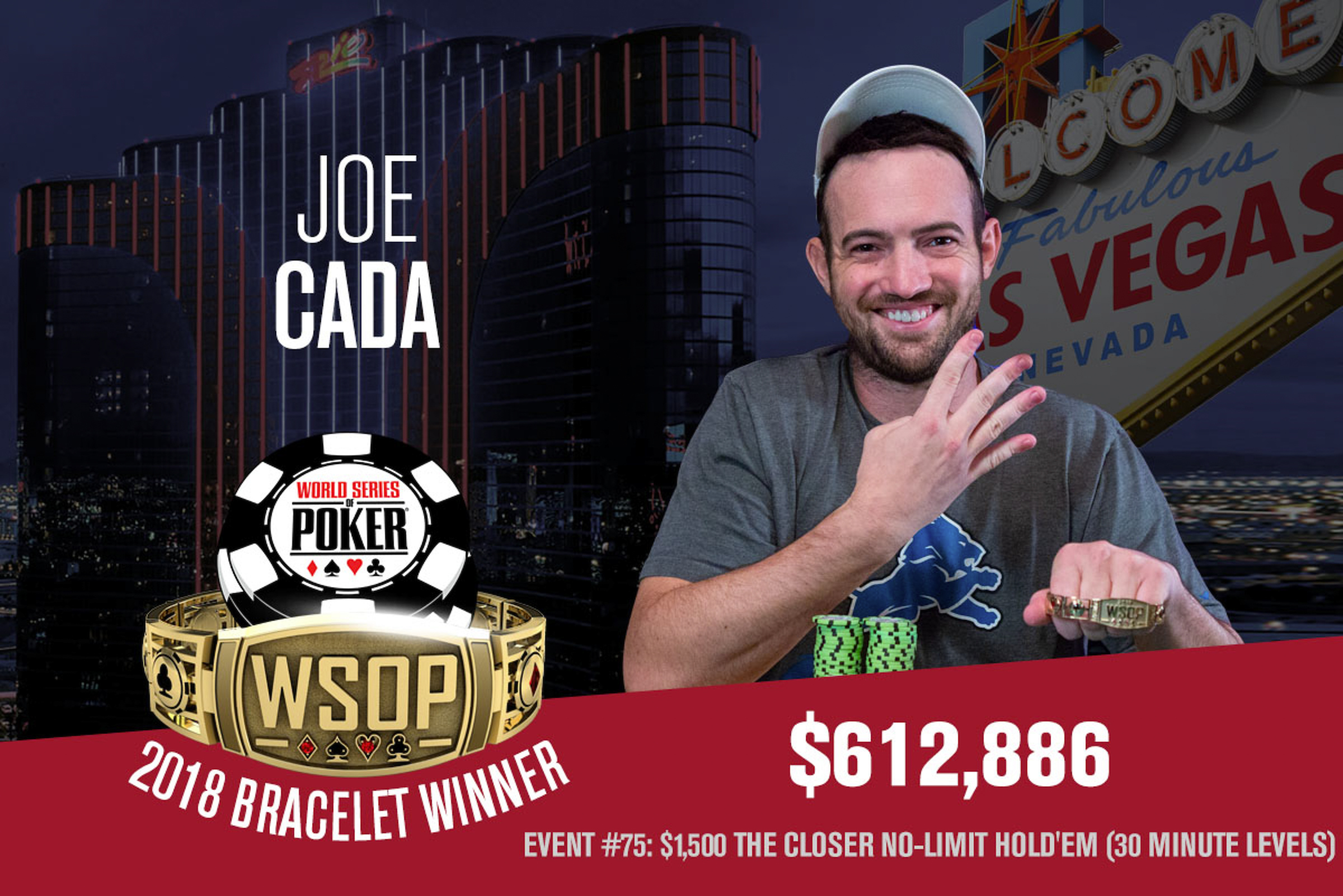 The Closer? Joe Cada won his second bracelet of the summer, and fourth overall, in the $1,500 “Closer” tournament two days after finishing 5th in the WSOP Main Event. (Image: WSOP)

The Michigan native is making a strong case that he could be the best large field poker tournament player in the world by besting a field of 3,120 players just days after finishing 5th in the 7,874-player field Main Event.

Player of the Year Scramble

Cada won his first bracelet of the summer, and third of his career, in the $3,000 No-Limit Hold’em Shootout, in early June. Now towards the end of the World Series, he’s won nearly $3 million in the closing week to finish his 2018 WSOP with two titles, a Main Event final table, and seven cashes.

But he still won’t win Player of the Year unless he changes his mind and travels to the Czech Republic in October for WSOP Europe.

Even more amazing to some, Cada doesn’t trail only one player. He’s in 4th position on the POY leaderboard, behind Shaun Deeb, Ben Yu, and John Hennigan.

2018 WSOP Player of the Year Contenders

Cada said after winning the $1,500 event on Sunday that it’s “unlikely” he will travel to Europe in the fall, and he believes Deeb would be tough to catch in the POY race.

Epic WSOP Comes to a Close

The $1 million buy-in Big One for One Drop, which had just 24 entries on Day 1, is the only even left on the 2018 WSOP schedule. You know it’s been an exciting summer when Cada, who won two bracelets and made the Main Event final table, is only 4th in the POY standings.

To put things in perspective, Hennigan was so brilliant this summer that he got voted into the Poker Hall of Fame. During an 11-day period in June, he won the $10,000 HORSE and finished in the top 7 in three other events. Later in the month, he had another 7th place finish. But that wasn’t even good enough to lock up POY.

And you can’t forget about Yu, another bracelet winner from the past week ($50,000 No-Limit Hold’em High Roller), who cashed 15 times this summer.

Cada won’t win Player of the Year, which goes to show how epic the 2018 World Series of Poker has thus far turned out to be.

The most incredible thing about his WSOP this summer that he isn’t in the lead for POY. He is on a heater.

Wow, what an eventful WSOP it’s been this year! Amazing feel good stories,