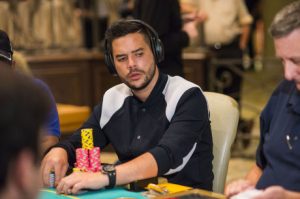 Jesse Sylvia went from final table short-stack to champion, as he won the Borgata Poker Open for $821,811. (Image: WPT.com)

The US pro beat fellow American Zachary Gruneberg heads-up and outlasted a field of 1,197 others to take home the top prize of $821,811. It’s his biggest score since his appearance among the November 9 and his first major first-place finish.

Sylvia’s results since 2012 have been good, but winning a major come as some relief to the 30-year-old; it means he won’t be forever known as the guy who apparently “mis-clicked” his way to second-place on poker’s biggest stage, albeit winning over $5 million in the process.

On the final hand of the 2012 Main Event, Sylvia, having started the hand with around 35 big blinds, called Merson’s all-in 4-bet shove with just Q♣J♣.

He had sensed weakness and he was right, but it was the wrong kind of weakness, as Merson turned over K♦5♦ to find himself, to his surprise, ahead.

Whether it was exhaustion that caused him to make the call, or a moment of stratospheric but back-firing meta-thinking, there was no hint of a meltdown in Atlantic City on Friday from Sylvia.

That dubious honor went to Colombian Farid Jattin, who began the final table as a dominant chip leader, holding almost half the chips in play, but managed to implode his stack and headed to the exit first.

Sylvia, meanwhile, did the opposite. Starting the table as the short stack, he delivered Jattin’s first hit when he tripled through both Jattin and Simon Lam, holding pocket fours against two sets of A-K. Jattin proceeded to lose pot after pot before Gruneberg put an end to his misery with pocket aces, which made a set against Jattin’s pocket eights.

By the time Sylvia faced Gruneberg heads-up, the players were almost even. The chip lead was traded back and forth twice, before Sylvia began to slowly pull out in front.

By now a sizeable chip leader, Sylvia shoved with J♥5♥ and Gruneberg called off his remaining chips with A♠2♣. A jack on the flop put Sylvia ahead but it also put three clubs out there; another would have been enough to double up Grunenberg with his deuce of clubs. But it wasn’t to be, and two blanks on the turn and river sealed the deal.

Next stop on the WPT Season XV tour will be the WPT Maryland at Maryland Live! Casino in Hanover from October 1 to 5.