Jeff Rossiter Opens Up About Career and US Online Poker 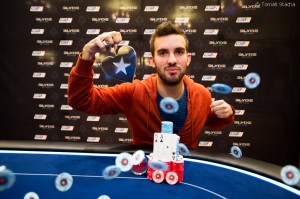 When a poker pro is sitting on millions of dollars in winnings, it feels a little insincere for them to speak candidly about their career. Are there really any negatives to speak of when your life consists of raking in piles of chips at the felt?

Yet as content as many might seem, Australian pro Jeff Rossiter doesn’t think the picture is painted as clearly as it should be. In an interview with igaming.org recently, Rossiter opened up about his rise to fame, why his big success isn’t as big as it’s made out to be, and what he thinks the expansion of online poker in America really means.

During 2011’s Aussie Millions, Jeff Rossiter went from a relatively unknown player to big news after getting a deep run in the Main Event. As a rookie player, Rossiter outlasted big names like Chris Moorman and Patrik Antonius. But when three-handed play began, the rising star lost his footing as chip lead 60 hands later. The tournament brought him in AUS$700,000, a somewhat far cry from the AUS$2,000,000 first-place prize won by David Gorr.

“First poker was just fun, then it turned into my side income and then after Aussie Millions in 2011 I realized that it could be something for at least a few more years,” Rossiter told igaming.

Before his first big event, the Australian mostly had experience with cash games. Though nervous because it was his first big live tournament, Rossiter remained cool for the most part. As a moderately experienced poker player he knew what was expected of him. During play many noted that Rossiter kept his composure, but it was during breaks where the reality of the experience caught up to him. Still, he confessed that if given the opportunity to play the final table again he would, especially with the knowledge he now holds.

Compared to 2011, last year saw Rossiter become a full-fledged success. 2013 came with a second-place finish in the GuangDong Asia Millions in Macau for $3.155 million. Additionally, he won two side events during the European Poker Tour, came in fifth during the London Main Event for $246,972 and took $251,000 at three High Roller final tables.

Even with these incredible victories, Rossiter isn’t getting too comfortable. Though acknowledging the success, he knows that with traveling expenses, live circuits don’t always result in winnings. Rossiter knows he is in a good position, but always prepares himself for what can potentially happen.

Though the tournament scene has been kind, Rossiter is not getting ahead of himself. Where many players and seasoned pros have aspirations of fame, he finds that money is more important and is the best way to keep his lifestyle.

“Fame and trophies are no motivations for me, if I had really good accessible live cash games to play in I would definitely prefer that,” he said. “I play poker for the money, that’s what it’s all about. I definitely enjoy poker, and live tournaments in particular, a lot. In the end there’s absolutely nothing like the excitement I get from being deep in a major live event.”

Despite that $3 million cash at GuangDong, Rossiter only banked $631,177 due to the fact he had only invested in 20 percent of his own action. But popular rankings site HendonMob still shows the $3.1 million cash. The Australian player is very open with the fact that those numbers are quite skewed and deceiving. He feels that people who keep track of those numbers need to understand what they mean.

Proud of his second-place spot on the Australian all-time money list, Rossiter still knows that sharing his cash with investors and players he swapped with takes a hit to his finances. His incredible 2013 is significantly softened by the truth behind the tournament results.

Rossiter is at the point in his career where he would gladly accept sponsorship from a site like PokerStars. That being said, he doesn’t feel there are any open spots for him just yet. For online poker, though, he feels that there is a much larger issue at hand. Addressing the expansion of online poker in the United States, Rossiter says there is a difference between what is good for the poker economy and what is good for the rest of the world.

Because of the nature of the game, most online poker players would just end up losing games, says Rossiter.

Even with that statement, Rossiter admits he doesn’t necessarily care about the results either way. He can’t deny that poker has put him where he is now.

As for 2014, Rossiter will be busy sweeping the tournament scene. Several EPTs, the WSOP APAC in Melbourne and possibly the WSOP in Vegas will give an opportunity for Rossiter to collect even more cash. Hopefully those potential victories will see less discrepancy between an advertised amount and his actual winnings.