The Mid-States Poker Tour (MSPT) paid its twelfth visit to Minnesota’s Running Aces casino over the weekend, and the tournaments drew the biggest turnout in the event’s nine years, with Jeff Birt coming out on top to win $81,402. 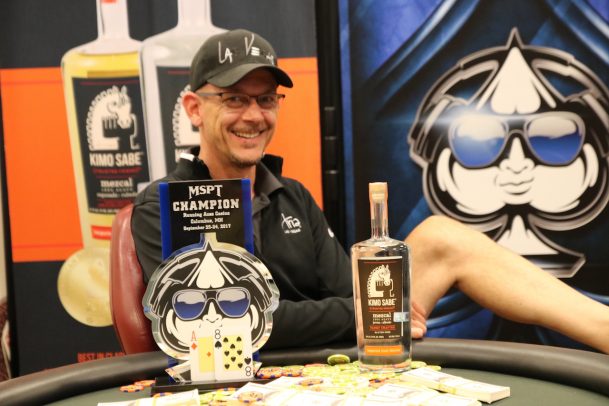 Jeff Birt had a leg up on his competition in the MSPT Running Aces tournament. (Image: MSPT)

The Running Aces casino is located just north of the Twin Cities.

On Day 2, just 68 returned to action, which meant nearly two dozen needed to go before the money was made. Among them were Minnesota poker pro Kou Vang, last year’s runner-up Vic Peppe, and bubble boy Joseph Michael.

Also cashing was Keith Heine, who finished 18th for $4,070 and 200 POY points. Thanks to two prior final table appearances, the Missourian already sat atop the Kimo Sabe Mezcal MSPT Season 8 Player of the Year leaderboard, and now he’s extended his lead to 2,967 points. His closest competition includes Keith Block and Jason Ramos with 2,500 and 2,250 points, respectively.

Trading in His Clubs

“This is my passion,” Birt told Running Aces officials after his win. “[Poker] took over the game of golf. I suck at golf.”

Prior to the win, Birt had $50,691 in tournament earnings, including one cash on the MSPT for finishing 11th in December’s Canterbury Park finale for $7,626. Over the weekend, he more than doubled that and joined the six-figure club.

“I thought I played pretty well,” said Birt, a 50-year-old local businessman and part-time poker player. “I was short stacked, I just had to pick the right spots, be patient, and let the cards come to me. It’s been a long time coming. It was a good time, enjoyable.”

In the final hand of the tournament, Birt held a decent chip lead over Wisconsin truck driver Tony Lacey. In a limped pot, the two saw a flop of 4♦J♠6♠ and Birt check-called a bet of 250,000. On the A♥ turn, Birt checked for a second time and Lacey fired 400,000.

Birt woke up with a check-raise to 1.4 million and then called when Lacey moved all-in for 2.4 million total. Lacey held the A♣2♠, but he had a kicker problem as Birt held the A♦8♠. The J♣ was no help to Lacey, who had to settle for second place and a $50,325 consolation prize.

“I know a lot of people would’ve shipped it with a lot of hands I laid down, but that’s not my style,” Birt said of his up-and-down journey. “I try to pick the better spots. The very next hand you could have pocket aces and double up, so I don’t always believe in getting it in. I had a couple of lucky spots, but I think I played well.”

Season 8 of the MSPT continues in October with the 2017 MSPT Michigan State Poker Championship at FireKeepers Casino in Battle Creek, Michigan.