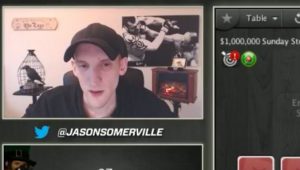 After 57 days, Jason Somerville on Twitch season 4 has concluded, with the poker pro earning $42,000. (Image: www.PokerStream.com)

After 57 epic days, Jason Somerville on Twitch is done for the time being.

Season 4 of his Run it Up! saw the poker pro complete 374 hours of intense online poker action.

Viewers enjoy his friendly, honest assessment of opponents and his own play. Before making a decision, he shares his reasoning with his audience.

Poker fans flocked to Twitch in droves on a daily basis throughout this past season to watch Somerville compete in online poker tournaments such as the World Championships of Online Poker (WCOOP).

Somerville is expected to come back to Twitch for another season.

When the new streaming episodes will begin is unknown, but many poker fans will be waiting anxiously.

The Makings of a Twitch Poker Star

Entertaining an audience is all about having charisma and, when it comes to streaming poker games, providing sound commentary is desirable.

Somerville had success with his Run it Up! Twitch stream because he has a good mix of personality and poker talent.

Scott Seiver and Daniel Negreanu are two poker pros that would fare well on a regular Twitch streaming show. They are both talented poker players that are likeable and have experience providing poker commentary.

Seiver received rave reviews from the poker world for his commentary during the live stream of the 2015 WSOP One Drop event.

Those wondering what the heck Twitch is are likely familiar with YouTube. Both apps are similar, except Twitch provides live streaming videos of poker, video games, and more.

Twitch has been good to the poker world.

Thousands of poker players stream online poker games live on Twitch, similar to what Somerville has done, just without as much popularity.

WSOP.com players may be familiar with Thomas Kearney, otherwise known as “butters” online. He is one of the top poker players in Nevada and made a deep run in the 2015 WSOP Main Event.

Kearney hosts a popular Twitch channel, “butterspoker”, where he allows viewers to watch him grind online poker games. Kearney’s popularity has grown since his 15th place finish in the Main Event.

He doesn’t have Somerville’s charisma, but provides detailed explanations as to why he is making each decision.

Who will be Twitch’s next poker star?