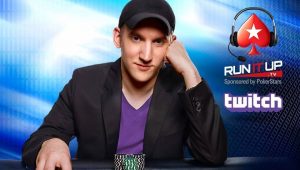 “The RIU Reno series is unlike anything that has ever really existed before in poker,” says Jason Somerville.

Jason Somerville is set to spin-off his ever-popular Twitch TV series, Run it UP, into a six-day live poker festival that will include tournaments, seminars and player parties.

Run it UP Reno (RUI Reno) will take place at the Peppermill Casino Reno from October 20 to 25, and hosts a main event that will be engineered and designed specifically for Twitch, the PokerStars pro told PokerNews,com this week.

The $500 main event will be streamed live on the internet gaming channel, with Somerville himself doing the commentary.

“The RIU Reno series is unlike anything that has ever really existed before in poker,” said Somerville. “For me, RIU Reno is not just about playing poker, but also having a fun experience from the get go.

“I’m trying to invite a variety of interesting people that are going to come and make the event special regardless of how your poker goes, regardless whether or not your aces hold up during the tournament, you’re still going to have a good time.”

“I played about 100 sessions of five-card PLO during the last stream, and I am guaranteeing you for sure there will be five-card pot-limit Omaha cash games running at the Peppermill during this tournament series,” he added. “For me, man, I’m trying to make things as fun as possible.”

It’s been a busy few weeks for Somerville.

As soon as the World Series of Poker was over he embarked on the PokerStars Pro Tour with fellow sponsored players Daniel Negreanu, Liv Boeree and Chris Moneymaker.

This was part of PokerStars’ grassroots campaign to win the hearts and minds of the California public and, as the legislative process in the state to legalize stalls, to educate on the importance of online poker regulation.

The tour took in 11 stops at card rooms throughout California, with players meeting and greeting and playing low-stakes tournaments with the public.

In the meantime Somerville, along with Phil Hellmuth, has been named as studio commentator on upcoming new TV show Poker Night: The Tour, while signing a two-year deal with Twitch to continue broadcasting Run it UP, which is due back on air on August 16.

“Everything is awesome, I’m super excited to have signed a new deal with Twitch,” said Somerville. “Two more years of streams to come. I did 78 days in a row in the spring, and I enjoyed every single day of streaming, all 500 hours of streaming. I know we had a ton of people enjoy the show, so it’s great to be back for at least two more years.”

Somerville says he will reveal more about RUI Reno, including the structures and formats of the events, in the coming weeks.

Awesome and congratulations Jason. I will be there!