Sporting a black PokerStars polo shirt, Jason Somerville went on CNBC’s Power Lunch program on Tuesday to defend online poker. He engaged in a debate with anti-gambling enthusiast James B. Butler, the executive director of the California Coalition Against Gambling Expansion. 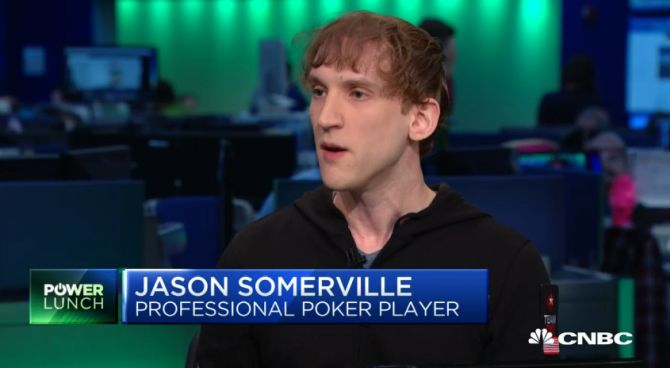 “There is a three-to-one loss for states and governments that use gambling as an economic resource,” Butler claimed in the outset of the interview. “It occurs through the social and economic cost of increase in crime, unemployment, welfare, homelessness, and bankruptcies, just to name a few.”

What Butler didn’t acknowledge is the fact that online gambling is already legal in most EU countries. The United States is trailing when it comes to this issue. The PokerStars pro, on the other hand, did.

“Online poker exists in a regulated environment in a majority of other countries around the world,” Somerville argued. “And it’s great to see states like New Jersey take a forward thinking approach on this, taxing and regulating. Hundreds of thousands of Americans are already playing online poker. But they’re playing on unsafe, unregulated sites where they don’t know the games are square and they don’t know their money is safe.”

Somerville then explained how dangerous it can be playing on unregulated sites. He mentioned that he himself had lost “tens of thousands of dollars” on unregulated poker sites at one time, because the money just “vanished in the middle of the night.”

Does Government Have a Responsibility?

The popular poker Twitch streamer can’t do anything about the money he lost on unregulated sites, of course. The government won’t protect him, because the sites aren’t technically legal businesses in the United States.

But does that prove the theory that state governments have a responsibility to allow for regulated online poker sites, so that its citizens who are already playing online don’t get scammed out of money?

“I think it’s the government’s responsibility to tax and regulate,” Somerville, said before being questioned if he felt he was being responsible for playing on illegal sites. “I had no choice, you know what I mean, like…”

“You had a choice not to do it,” Tyler Mathisen, the co-host interrupted.

“Sure, but the sites offer, you know, and they come off as reputable but, actually, they’re not,” Somerville fired back. “I mean, sites like PokerStars, which is [now] the most licensed and regulated site in the world, they are pushing for these regulations so that we can make sure that there is no underage play, that there is (sic) no problem gamblers playing, you know, we want to track those.”

“The unregulated sites . . .they don’t care if someone is losing their house or they’re playing underage. They’re just there to make money. So I think the government’s perspective should be we want to tax and regulate,” he added.

Butler then jumped in to give his two cents. And, as you may have expected, he didn’t exactly agree with the poker pro.

“Where do you draw the line with telling people what they should do with their own money?” he was asked.

“Well, maybe we should begin by at least not charging people for that choice,” Butler answered, alluding to the assertion that gambling is costly to society. “We need to say that there are some people that are not able to control themselves. It is the role of the government to provide some sort of safety to those, and not provide a virtual poker parlor.”

Somerville got the last word in. He explained to the show hosts that he has a residency in Canada, as well as in the United States, so that he can play on PokerStars online. Of course, PokerStars is already legal, up and running in New Jersey right now, so we’re not sure why he has to go to Canada, but we digress.

He finished up by asking why poker isn’t treated as fairly as other gambling industries, such as sports betting and horse racing.

This is the second time this month that the poker industry took a verbal beating from pundits on major cable television programs. Jason Mercier was interviewed on ESPNU’s The Dan Le Batard show last week. Le Batard insulted poker players prior to the interview and asked the 2016 WSOP Player of the Year if he had a gambling problem.

Its funny how Jason Somerville will go on tv and talk about how poker online sites aren’t regulated & how he got money stolen from him and then tells that the USA they need to regulate & tax theses same sites.

In my true honest opinion these sites and I mean all sites are shady in some way or another.
I wont name any in particular. But I have been dealing with these sites he talks about since the beginning and a lot longer than him.
I have won many trips and prizes , but never received one of them. I won a trip to Florida , never received the prize. I won a trip to Russia & never received the prize. In total 3 trips I had won on this site and they never gave me one of the trips… not one.

I have won a trip to the WSOP through a site and never received it. Won money on the site & never received it or able to cash out.
On the biggest site of the world for poker (I wont reveal names, but sure you know who I am talking about) I won millions and millions when first started out and never gave me one cent. I won many time later and was told I was cheating and with holding my money. First of all I don’t cheat, I don’t use software like many other players, which is cheating in my opinion. I play with my mind and that is all I need. In my opinion every site is corrupted and no good for the pubic. The Governments of the World from near and far should never allow a site to enter its economy, its jurisdiction, and land. If the governments of the world want to allow this form of play then create your own entity and control it your selves. Its the only way. I suggest blocking these sites as well to keep the cancer that they are from connecting to your citizens and taking their money.

Don’t people see…. scandal after scandal…site after site. For me live is the only answer and that u will receive your money you win. I only play at these sites for fun and nothing else….simply because I treasure my money and don’t wanna be ripped off by these sites again.

Funny how Jason Somerville aint asking for Poker to be regulated in Canada. ( Guess the Government don’t care about whats going on or don’t wanna deal with it) you will have to ask the Candaian Gov on that one.

your so full of shit hahaha seriously thats your comment and argument and jason isnt saying to put your money on a unregulated site hes saying lets make sure all sites are regulated to protect us. ill be laghing about your post for days john hahaha