The Mid-States Poker Tour (MSPT) has been around since 2009, and this weekend they celebrated their 100th $1,100 buy-in Main Event, which took place at Meskwaki Casino in Tama, Iowa.

After two days of play, 35-year-old family man Jason Ramos topped a field of 466 entrants to capture a $108,120 first-place prize. 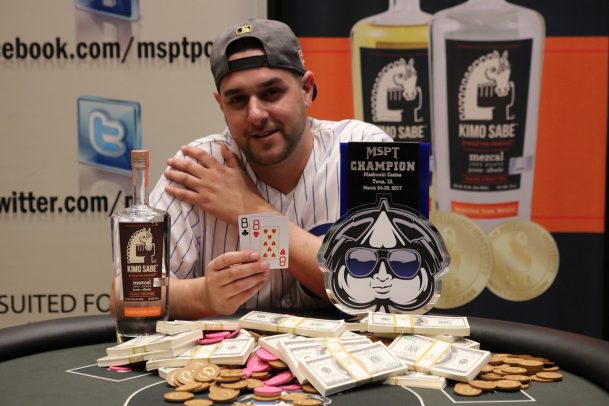 Jason Ramos, who won his second major tournament in seven months, took home $108,120 back to his fiancé and three daughters. (Image: MSPT)

Prior to the win, Ramos had $161,490 in lifetime earnings. Of that, $97,016 came after he topped a field of 2,121 entrants in October’s Event #1: $365 NLHE at the World Series of Poker Circuit Horseshoe Hammond, which recently concluded the Chicago Poker Classic series. That win inspired him to take a leave of absence from his sales job to not only play more poker, but to spend time with his fiancé and three daughters.

“I took a leave of absence in January to purse the poker a little bit, it’s paying off,” Ramos told MSPT officials after his win. “I got engaged in December, so the money is going to go towards a house and probably some more poker tournaments. I’ll take the family on vacation this summer for sure.”

The biggest hand for Ramos came at the final table with nine players remaining. On Hand #29, Vlad Revniaga got his stack all in preflop holding the Q♥Q♠ against the 9♦9♥ of Ramos. It was a bad spot for Ramos, but lucky for him the board ran out 5♠7♦J♥9♠J♦ and he turned a set to take a big chip lead.

“The turning point was the nines when he shipped with kings,” Ramos said of the hand. “I thought I had the best hand, but I didn’t. I got lucky and it was just steam-rolling from then on.”

To celebrate its 100th Main Event, which bested the previous Meskwaki record of 451 entrants, the MSPT awarded players a limited edition commemorative chip, and also provided free cake throughout Day 1B. The landmark Main Event drew some of the tour’s biggest names, many of who made the money in the top 45.

The MSPT now heads to Golden Gates Casino in Black Hawk, Colorado for an $1,100 buy-in, $200,000 guaranteed Main Event this weekend.