Jason Mercier is accusing fellow poker pro Brandon Cantu of being a “deadbeat” who has owed him money for 3.5 years. The 2016 WSOP Player of the Year took to Twitter to vent his frustration. 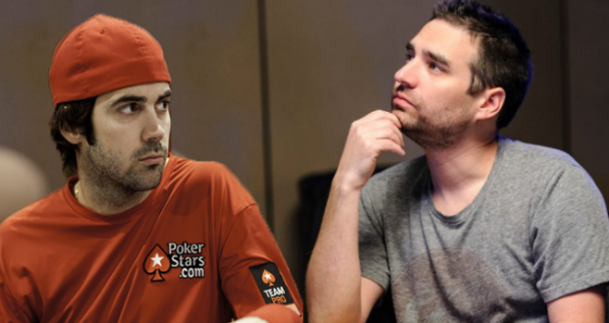 Jason Mercier (left) accused Brandon Cantu (right) of being a “deadbeat” who hasn’t paid him a penny of a loan he gave him 3.5 years ago. (Image: assopoker.com)

It’s unclear how much money is owed, but both sides agree there is an unsettled past debt. Mercier claims he hasn’t received a penny since he loaned Cantu the money, and he’s fed up.

It all started when the PokerStars Team Pro saw a negative comment by Cantu about him on Twitter. He then posted a screenshot of a text conversation between the two out of spite.

“I want 1k tomorrow. I think I’m being more than fair it’s been almost 4 years and my loan to you was supposed to be 3 days max,” read Mercier’s first text message.

Cantu responded by saying he doesn’t have the money but intends to pay him back. He then got defensive and insulting, telling Jason, “you’re not perfect.”

Mercier fired back. Cantu has owed him money for years. He wasn’t going to just sit back and allow his peer to insult him like that. After saying he hasn’t shamed him publicly “out of sheer pity,” the PokerStars pro fired this blast:

“You continue to somehow eat breathe and live your life and have the audacity to argue publicly that your side is somehow ok. You’re a complete joke. Pay me when you have it,” he said.

After the initial shots were fired, the peanut gallery on Twitter joined in. Most observers took Mercier’s side, but some suggested the poker pros keep this private. Almost no one appeared to have Cantu’s back.

Even Doug Polk took Mercier’s side. That may have been surprising to some considering he has been critical of the WSOP Player of the Year’s poker game the past year.

“Oh so if I pay someone money I owe them do I not have to ever pay in the future? It’s been 4 years dude,” he said in reference to Cantu mentioning he once paid Mercier back money he borrowed.

Things then got personal. Mercier referred to Cantu as a “deadbeat.” He also told him to delete his Twitter account and that his “10,000 fake followers won’t be upset.” Brandon, in a few posts, questioned the character of the people PokerStars hires.

“U have $10M, an amazing wife, titles and U make usury interest loans, threaten me publicly? @PokerStars pride,” he posted.

Where Did the Money Go?

Brandon Cantu has earned more than $4.2 million in live tournament winnings. That includes a $1 million score for a 2008 WPT title. So, where did all his money go?

He didn’t make it clear where his money went. But he’s admittedly struggling for money. The Washingtonian doesn’t have a significant cash since 2012.

But, apparently, he doesn’t have any money to pay back Mercier.

There is a Russian proverb. Do you want to lose the friendship – borrow other money.

How In the world do you spend 4.2 Mill and now have to borrow funds?