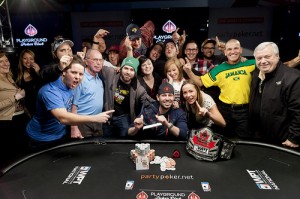 Winning a big title can mean a great deal to a player. For a seasoned veteran, snagging yet another victory further solidifies their recognition as a champ. For a rookie with only a few matches under their belt, it can kick-start a promising career full of tournament wins. No doubt Jason Comtois hopes his recent victory is a sign of things to come.

Comtois, a 27-year-old Quebec native, came out on top at the PartyPoker.net World Poker Tour (WPT) National: Canadian Spring Championship. Victory came on the fourth day of play at the Playground Poker Club in Montreal, as Comtois managed to top a field of 1,079 players and win the top prize worth CAD$178,114 (approximately $161,000 USD).

With a CAD$1,100 ($905 USD) buy-in, the WPT event started out quite humbly, even though it brought in names like Antonio Esfandiari and Mike Sexton. However, none of those recognizable players made it through to the final table. Instead, it was up to some relatively unknown players to lead the charge and fill the remaining hands with excitement.

For most of the event, Comtois was one of the shortstacks. But despite this only being his second WPT event, he managed to gain some ground on the third day. After a crucial set of double-ups and a cheering crowd, Comtois took the final table.

To kick off the final table, Comtois and fellow 27-year-old John Paul Tabago started the day off by doubling up through Mario Lim. Crippled at Hand 21, Lim went all-in out of desperation with Kc 3c. Johnny Mazzaferro, who initially raised, called with Ah Js. Lim was eliminated in sixth place and took away CAD$36,106 ($32,704 USD).

Alexander Wong broke up a slow stretch of play by going all-in at Hand 76. On a flop of Kc 8d 5h, Wong’s pocket sixes couldn’t hold up against Daniel Gagne’s Ks 8c when the turn and river dealt Js 9c. Wong was eliminated and went home in fifth place with CAD$44,586 ($40,385 USD).

After another two hands, Comtois doubled up. Mazzaferro doubled up as well and went all in with Qd Jd. Comtois raised and called with Ah Qc while the board dealt out Kc 5d 4d Qh 9c. Comtois had the higher kicker and sent the 2013 WPT Canadian Spring Championship winner home in fourth with CAD$59,762 ($54,132 USD).

Not wanting to stray from the night’s theme, Tabago doubled up to continue three-handed play until Hand 113. Gagne raised to 850,000 on the button and then called when Tabago reraised to 2 million on the big blind. After a flop of Qh 9s 3c, both players checked. The turn card was the Jd and had Tabago bet 2 million. Gagne raised to 4 million and Tabago responded by going all in. Gagne called holding Kc Td against Tabago’s pocket nines. The river brought a 3s, delivering Tabago a full house to beat Gagne’s turned straight. When the smoke cleared, Gagne took third place and CAD$80,904 ($73,282 USD).

The heads-up match saw two crucial hands turn the odds for shortstacked Comtois. The first hand saw Comtois double up to take the chip lead over Tabago. After six hands, Tabago moved all in on Hand 131. A 925,000 preflop raise by Comtois was reraised by Tabago to 2.6 million. Comtois raised all in with Ac Kd and Tabago called all in with Qc 4c. The flop produced a king to cinch victory for Comtois. Tabago was out for a second place finish worth CAD$124,758 ($113,005 USD).