Jamie Gold isn’t bluffing when he says “players should be vetted so we can see what they’re bringing to the game” in response to the alleged Mike Postle poker cheating scandal. I spoke with the 2006 poker world champion to get his thoughts on the shocking scandal, and to find out how this incident compares with a famous NBA ref cheating scandal that rocked the basketball world in 2007. 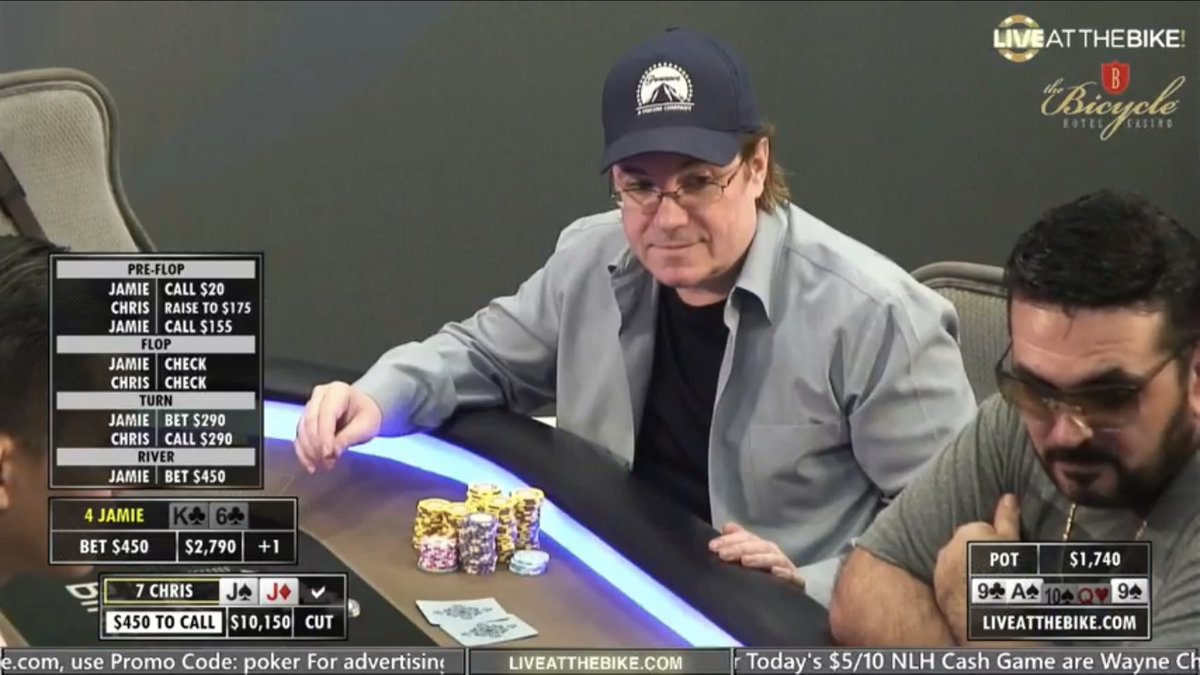 Gold has an interesting perspective on the Postle situation. He himself has been cheated at the poker table in the past. He also served as an adviser for the upcoming movie, Inside Game, which chronicles the infamous cheating scandal of Tim Donaghy, a former NBA ref who fixed games to win bets.

Inside Game premiers in theaters in 30 NBA cities on Friday. If you don’t happen to live in one of those towns, it will soon be available for everyone online. As an avid basketball fan, the trailer looks quite interesting.

Gold earned a $12 million payday for winning the 2006 WSOP Main Event, one of the biggest scores in tournament history to this day. He’s one of the most popular former world champs mostly because of how he won poker’s most prestigious tournament – by pulling off a plethora of crazy bluffs while using speech play to his advantage.

Jamie Gold Knows What It’s Like to Be Cheated

Jamie Gold has firsthand knowledge that cheating occurs in poker. After all, he’s been the victim of “collusion” at the poker table. And he’s appeared on numerous live-stream and televised poker shows. So, he’s as much of an expert on the Mike Postle situation as anyone.

“I’ve been cheated in some pretty incredible games at the highest level,” he told me. “We’re buying in for $100,000 to $1 million. I’ve been cheated in a few different ways, with new decks and dealers coming into the game. They weren’t even smart about it. They’d deal me quads against better quads. It was so bad, they weren’t even smart about it.”

Jamie quit playing in a prominent poker room which he requested remain anonymous “about 10 years ago” because the staff refused to ban the cheaters.

“There were rings of people colluding against me,” he said. “And they wouldn’t permanently ban them. They’d just ban them overnight.”

Although Jamie Gold knows that cheating occurs in poker, he loves this game and believes only a small percentage of players cheat. From my experience playing poker for the past 16 years, I agree with the former world champ.

Gold has appeared in numerous live-streams and on many televised poker shows over the years, from “High Stakes Poker” to “Live at the Bike.” Recently, he competed on “Poker After Dark” on PokerGo. He’s experienced firsthand how live-streamed cash game shows are produced. So, what does the former poker champ believe should be done to prevent another Postle situation?

“I think no players should have cell phones or electronic devices when at the table (when playing in a live-streamed game),” he suggests. “And the players should be vetted so we can see what they’re bringing to the game.”

I asked Gold if he’d have a problem with security patting him down prior to playing in a live-stream game to ensure for precautionary reasons.

“Absolutely not,” he said.

Gold referred to the Postle situation as “shady.”

“They didn’t have certain delays that you need to have. They were also allowing too many people to have access,” he said.

Gold suggests each live-stream show should have a “dedicated person,” and only one, who has access to hole cards in real time. He said that the producers should be transparent about who that dedicated person is. That way, he argues, if another player is caught cheating, viewers will know how that player gained access to an opponent’s hole cards.

Gold is an avid sports bettor who bet on some games that Donaghy fixed. The 2006 Main Event champ found some similarities between the NBA betting and Postle poker cheating scandals.

“The fact that someone, really for pennies at a time, was willing to compromise themselves and the integrity of the game, willing to basically sell their soul, they saw an opportunity to make some money by cheating. And then we saw what it did to the NBA and what Postle has done to poker,” Gold said.

Gold said he believes that Postle and Donaghy probably “grew up loving” poker and basketball, and never intended to become cheaters. He argues that, somewhere along their paths, they determined that cheating was the easiest way to make a buck.

Paul Martino, a friend of Gold’s, produced the upcoming movie about Donaghy, Inside Game. Will Sasso, formerly of “MadTV,” and Eric Mabius, who plays the role of Donaghy, star in the movie. If you live in one of the 30 NBA cities, you can watch it in theaters beginning on Friday.

Gold didn’t appear in the movie nor did he assist in the production, but he is helping his friend, Martino, get the word out about the upcoming flick.

“I was brought on at the end,” he said. “I’m very close with Paul Martino, who produced and financed the movie. I wanted to help them market it. There’s such an interest in the story. The story is so incredible. Donaghy’s the only one that got caught. But you can’t tell me he’s the only referee who cheated.”

Sadly, Gold is probably right with his analysis. Much like Gold, I’m a die-hard sports and poker fan, and I’m not too naive to believe there are cheaters who haven’t been caught yet in both sports and poker. In fact, I’ll give a shameless promotion on a recent article I wrote here at CardsChat about this exact topic.

As I wrote in that article, Postle isn’t the only cheater in poker. And, basketball fans would be naive to believe Donaghy is the only ref who has cheated, as Gold stated. But I also don’t think cheating is more prevalent in poker than any other game where money is at stake. Gold agrees with that argument.

What He’s Been Up To

Those who began playing poker during the poker boom era certainly remember Gold’s run to $12 million in the 2006 WSOP Main Event. You may not be aware of what he’s been up to recently, however. He still plays poker and loves the game as much as ever. Winning tournaments isn’t a huge concern of his, however. Instead, he’s more focused on the charity aspect of poker these days.

“I’ve focused on producing celebrity poker events, trying to raise as much money for causes I believe in as possible.”

Gold will host a private charity poker event in Miami this winter during Super Bowl week. The former poker champ uses his platform as an ambassador to raise money for various causes.

He also serves as an adviser to certain businesses, some of which he also backs as an investor. Poker and sports betting are two of his biggest passions. Gold still enjoys poker, but doesn’t play as often as in the past.

“I’ve never been a full-time professional poker player,” he told me. “But I love the game so much that I try to be as good of an ambassador as I can even though I only play a few select tournaments each year when I have time. I try to use my platform for positivity for poker to raise as much money for important causes.”

Gold still occasionally pops up on live-streamed poker shows such as “Poker After Dark.” Even 13 years after winning the Main Event, he’s still a popular figure at the poker table.

Old Jamie Gold Fish still trying to beat the last few ounces of his 15 minutes of fame for all it’s worth.

Jamie is a true legend of the game and a far better player than he is given credit for as well as being incredibly entertaining to watch.

Jamie’s victory at the 2006 Main Event was the most dominant WSOP performance of all-time, being chip leader for the entire tournament.

People say Jamie got lucky, but no-one gets lucky for 7 days straight. Jamie had the perfect strategy and executed it flawlessly. He outplayed everyone and crushed 7,000 players in a performance that will never be equalled.

Jamie Gold is one of the all-time greats up there with Phil Ivey and Stu Ungar.