James Chen shipped the €250,000 Super High Roller at WSOP Europe for €2.84 million. But Tony G still held true to his word that he will dominate the GTO crushers in Rozvadov. 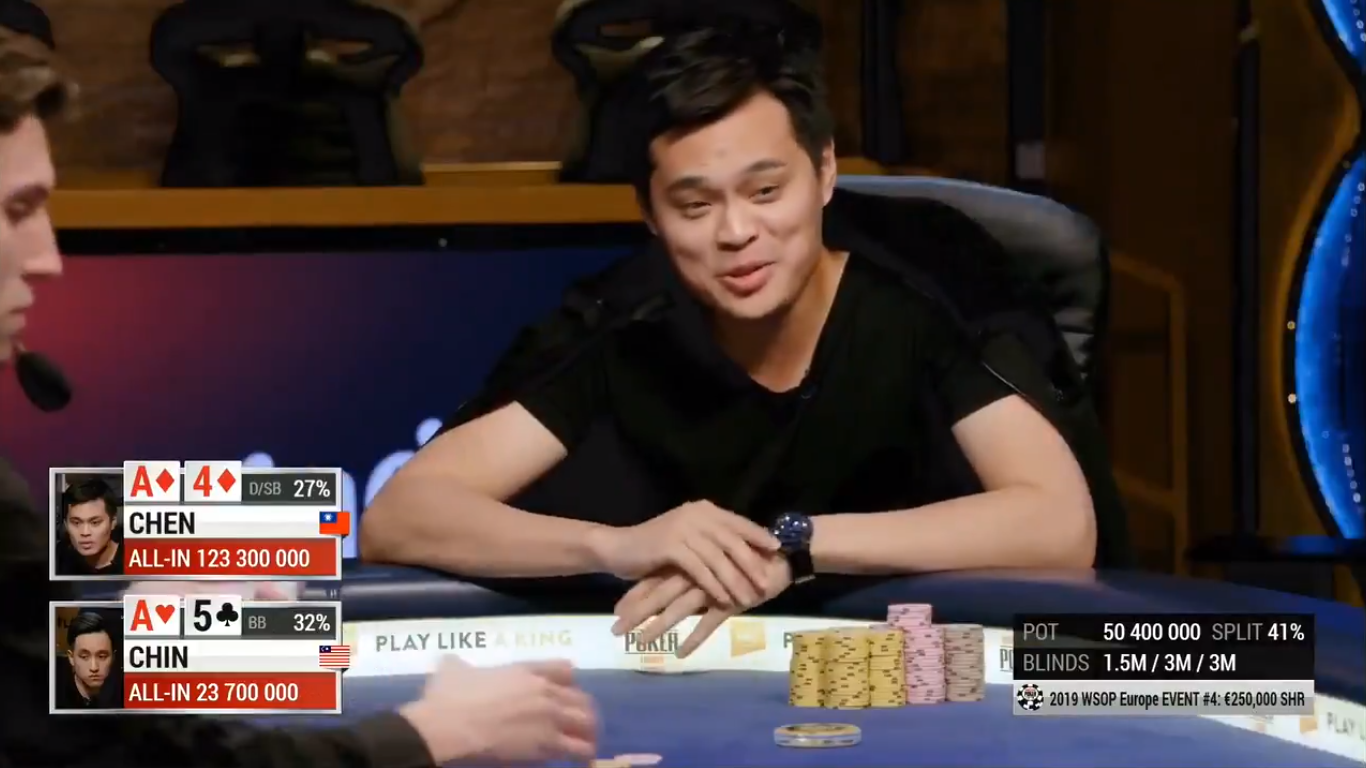 James Chen is about to hit a 4 to win his first WSOP bracelet. (Image: PokerGo)

Tony G Was the Table ‘Captain’

Antanas “Tony G” Guoga’s political career is now over. That means he has more time to play poker like he did back in the day during the poker boom era. Prior to the start of the 2019 WSOP Europe series, the former European Parliament member called his shot. He said he was going to travel to Rozvadov, Czech Republic this month to “fight back” against the GTO crushers. With one high roller event in the books, he’s backing his mouth up.

Guoga ran deep in the Super High Roller but was eliminated in fourth place out of 30 entries. The loudmouth poker player took home €799,045 for his efforts. Not a bad start to the WSOP Europe series for someone who talked a big game.

James Chen followed up an impressive summer in Las Vegas – five cashes and a runner-up finish – with his first bracelet, and the largest score of his poker career. The €250,000 Super High Roller champion beat a tough field of 30 of the best players in the world.

Ryan Riess, the 2013 WSOP Main Event champion, was eliminated on the bubble in sixth place when his A-J couldn’t overcome Tony G’s A-Q.

Cary Katz was next to the exit in fifth place when James Chen sent him home. He earned €538,722 but missed an opportunity to bust Tony G earlier in the session when he folded pocket jacks pre-flop to Guoga’s all-in bet with A-Q. The tight six-handed fold may have saved Katz from bubbling had he lost the hand. But the decision also may have cost him a shot to win it all. We’ll never know.

Christoph Vogelsang was eliminated in third place (€1,185,161) when he lost a race to Chin Wei Lim. That set up Lim and James Chen for the bracelet and the former was at about a 2-1 chip disadvantage when the match began.

Both players went back and forth for nearly two hours. It all came to an end when Lim put his final nine big blinds in the pot with A-5 and was called by A-4. Instead of doubling up or chopping, the board ran out A-J-9-3-4, giving Chen the hand, the chips, and the bracelet.