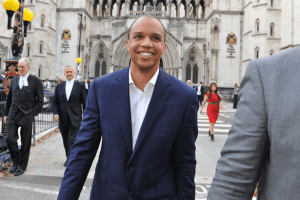 Phil Ivey leaving court after the Crockfords ruling in October. Things fared little better for him in New Jersey, where his motion to dismiss the Borgata lawsuit was rejected by a judge. (Image highstakesdb.com)

Phil Ivey’s attempt to have the Borgata’s lawsuit against him dropped has been rejected by a US District Judge.

The case relates to four sessions of baccarat that Ivey and fellow defendant Cheng Yin Sun played at the Borgata in 2012, during which they won $9.6 million.

The casino claims that the edge-sorting technique the pair used amounted to fraud under New Jersey law and should carry a prison sentence of “more than one year.” Ivey and Sun contest that the technique, in which a player is able to determine the value of a card by observing subtle flaws in the pattern on the back, is skill and therefore legal.

Ivey and Sun’s lawyers had also moved to have the case dismissed on the grounds that a six-month statute of limitations to recoup money lost in an “illegal” game had expired.

“Ivey and Sun argue that Borgata willingly agreed to all of their requests and provided all the implements of gambling, and that all of those requests, along with their observation of the patterns on the playing cards, were lawful,” summarized Judge Noel Hillman.

“Ivey and Sun also note that even though Borgata wishes to cast itself as a victim of deceptive intentions, the ‘essential mission of Borgata’s casino operation is to encourage patrons to lose money by orchestrating a plethora of deceptive practices, such as loud noises and flashing lights on slot machines, hiding the clocks, making exit signs almost impossible to find, having cocktail waitresses wear revealing clothing, and comping copious amounts of alcohol to ‘loosen up’ their patrons’.”

However, while the judge expressed little doubt that the defendants’ characterization of the casino’s methods were accurate, he concluded that “at this stage of the proceedings Borgata has pled plausible claims sounding in fraud” and allowed the case to proceed. He did however, remark that it was odd that the Borgata took so long to realize what the defendants had been doing.

Second Case to go Against Ivey

He also gave the go ahead for the case against Gemcao, the card manufacturer that sold the Borgata the cards used in the game, and were specifically requested by Ivey for their lack of uniformity of the patterns on the backs.

This is the second high-profile edge-sorting case to go against Ivey and Sun in recent months. In October London’s High Court ruled that Crockfords Casino was entitled to withhold £7.7 million ($12.5 million) in punto banco “winnings” because it believed the pair had cheated by edge-sorting. Ivey has formally filed papers to appeal that ruling.

“I believe that what we did was a legitimate strategy and we did nothing more than exploit Crockfords’ failures to take proper steps to protect themselves against a player of my ability,” he told reporters outside the court in London.

So, the casino fails to realize, until someone starts winning big, that the cards they are using are as good as “marked”; so that is the players fault? Hey Ivey, here is one thought: Don’t admit you are doing that!! Say “No idea what you’re talking about” and stick to that like glue. How could they possibly prove you are edge sorting? They cannot. Accuse, yes, prove, no. Until you admit it….never wise up a sucker, remember?

This does make one wonder, however; what about those poker cards? Are the top pros no more than edge sorting at major events? It’s a legit question, in light of how often this is occurring. And smaller casinos on tighter budgets really use cards until they are kind of ragged. Makes you wonder…..

I think there are to many variables in poker for Edge-sorting to be used since it relies on the lower face value cards being rotated to the higher face value cards and them keeping the 180 rotation (this is done at the patrons request) normally saying it brings them luck and request the use an auto shuffle so there no mistrust on the dealer. This normally works with automatic shufflers as they don’t rotate cards just shuffle them. During a poker game not only the dealer but all players at a table control this and the cards are hand shuffled individuals can turn the cards dealer turns the cards then you can also be moved tables. There are just to many variables to make this viable. It is also not possible to identify the exact value of a card or its suit just if it is low or high say 6789 or 3456 you can’t know exactly. Since these cards can be on the board to.

I’m sure sometimes imperfection or flaws may have been exploited at some point in time somewhere at a poker table whether it be manufacturer defect or imperfections on cards. However they would normally be spotted by more than one person and is normally bought to light by someone at the table for fear that others may know and use it against them in future betting. Since poker is as much a psychological game as it is a numbers game.