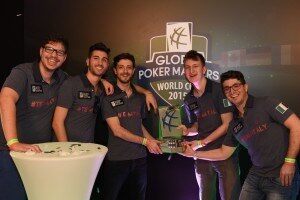 The inaugural Global Poker Masters (GPM), an event which CardsChat was an official media partner of, took place this weekend in Malta and when the betting was over it was one of the statistical underdogs that ran away with the championship title.

Dubbed the World Cup of Poker (not to be confused with PokerStars World Cup of Poker), the event saw teams from Canada, Italy, France, Russia, Ukraine, the US and UK compete for international supremacy and when things came to a close on Sunday night it was Italy celebrating in the spotlight.

Despite being flanked by some of the best MTT players the US, Germany, the overall favorites, Canada, had to offer, it was the unassuming Italians that powered through in the final stages to take the championship.

Day 1 Dominance by the US

Day 1 started with an opening draw before five SNG style matches conspired to separate the teams. Despite being tipped to take the title, the early rounds weren’t kind to Team Canada with the likes of Andrew Chen and Jonathan Duhamel losing their opening matches to leave their country languishing languishing near the bottom of the leaderboard.

Fortunately, a win by Marc-Andre Ladouceur meant Canada managed to lock up 43,000 points and finish comfortably ahead of the UK. The Brits couldn’t get anything going on Day 1 and became the first casualties of the Global Poker Masters.

After axing the likes of Sam Trickett, Jack Salter, Louis Salter, Oliver Price and Simon Deadman, the seven remaining teams played for their seeding in Day 2 and when the chips had fallen team US received the all important bye to the finale thanks to a commanding performance throughout the day.

The Rise of Team Italy

Day 2 saw six teams whittle away at each other until only four remained. At this point the US still looked to be the team to bet, but a loss to Italy left its quintet players watching from the rail in third. Having secured the chip lead, Italy took a commanding lead over team Russia into the finale.

Now playing a series of heads-up matches, Dario Sammartino, Mustapha Kanit, Rocco Palumbo, Andrea Dato and Giulliano Bendinelli were all able to close out the event in style by winning each of their matches.

The impressive performance was not only a huge moment for Italian poker, but for the industry in general. Over the course of the event the official Twitch channel received more than 100,000 views and many thousands were reportedly glued to their stream from start to finish.